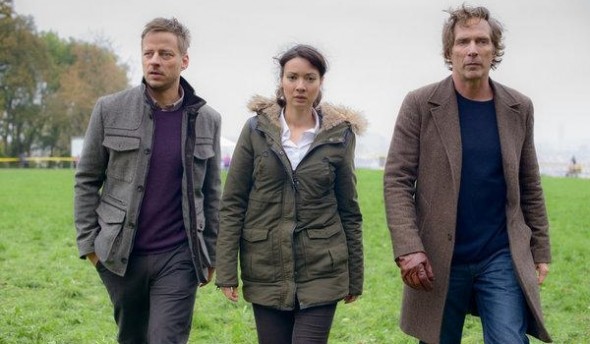 Last night, NBC aired the finale of Crossing Lines. The season ended on a cliffhanger that has viewers itching for season two. Will the show be renewed, or will it be cancelled instead?

Crossing Lines follows a former NYPD officer who’s become addicted to morphine and ends up working as a trash collector for a carnival in the Netherlands. The International Criminal Court recognizes his worth and recruits him to help investigate crimes that cross international borders.

The police procedural series debuted June 23rd to a disappointing 0.7 rating in the 18-49 demographic with 4.38 million viewers. The first hour ranked a distant third in its timeslot, easily beaten by a rerun of FOX’s Family Guy and the debut of Whodunnit? on ABC.

Though viewership is lower in the summer months, the peaock network could not be happy with these numbers. The later weeks saw them get even worse. Over the course of the season, Crossing Lines has fallen as low as a 0.5 demo rating and 2.51 million viewers.

If NBC were producing the Crossing Lines, there’d be no way that they would make a second season. There’s just not enough ad money to pay for the production.

Thankfully for fans, NBC doesn’t produce the show. Crossing Lines was jointly commissioned by TF1 in France and by Sony for their AXN channels.

NBC merely licenses the series so it costs them much less. Based on the ratings, it’s still extremely unlikely that the peacock network will air a second season.

However, there’s hope that another season will be produced by Sony and TF1. If that happens, another US channel could pick it up or, at the very least, episodes could be released on DVD. We’ll post any updates as they become available.

But, what do you think? Would you like to see a second season of Crossing Lines or should it be cancelled instead? Why didn’t more people watch? If NBC doesn’t want season two, which channel would be a better fit?

What did Dorn find in Ava’s hotel room?! I’ll miss Michel but so glad they saved Tommy. The suspense is going to eat at me unless Season 3 is produced. Also love the additions of Lara Rossi and Carrie Ann Moss. Fitchner and Sutherland never miss, and the others are growing on me. This is a smart show with amazing locations, strong female leads – with all the garbage TV out there, something this good should be allowed to go on.

I love this series. The international cast is great and it would be a shame if it doesn’t continue. It offers so much more than the average cop show. Just the feeling of jumping all over the world on their cases is so exciting.

I just 22 episodes on Netflix. I really enjoyed it and don’t know how I missed the show on tv. Glad it will continue because last season’s cliffhanger was awesome.

I’m 72 and still not to old to enjoy an adrenalin rush…smart series, giving us a chance to view or review Europe and its different cultures proving how everything is different yet it is the same…..

Michel killed off on the season 2 finale blew me away…

enjoying the first season very much.

I loved the series.It makes me mad that there is not a season two,three,four.Please renew it.Its right up there withBlacklist.Do not let this series slip threw the cracks.

I enjoyed this smart series very much….very much hope it will continue and we can access it here

This is an excellent show. I am hoping they will see this and continue.

I’m in South Africa And I just love crossing lines. I cannot wait for season 3.

THEY WOULD BE CRAZY NOT TO MAKE MORE SEASON’S. THIS IS ONE OF THE BEST SHOWS ON TV. THEY NEED TO GET RID OF THE REALITY SHOWS AND ADULT CARTOONS.IT’S SAD HOW THEY RUN THE SHOWS THAT SHOULD HAVE NEVER BEEN CREATED IN THE FIRST PLACE. JUST LIKE WHEN NBC DROPPED MEDIUM AND CBS RAN IT FOR PLENTY MORE SEASONS. SOME OTHER NETWORK NEEDS TO PICK IT UP.

Desperate for season 3. This show has kept me on the edge of my seat and there is no way it can be left as it is we need to know what happens next.