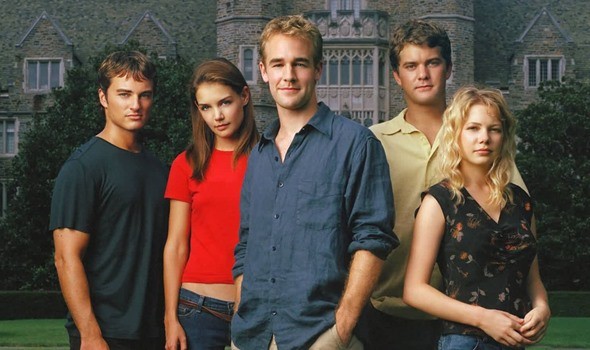 Can you believe it’s been 20 years since Dawson’s Creek began? Recently, the cast of the WB TV show spoke with Entertainment Weekly about the big anniversary.

For the first time in 15 years, the cast and creator Kevin Williamson reunited to discuss the legacy of Dawson’s Creek and where they think the characters would be today. Speaking to EW, Williamson revealed his thoughts on what Dawson (Van Der Beek) would be doing now:

I would want to, of course, show some conflict. I think Dawson became Spielberg, all his dreams came true. I think they shattered. I think he fell apart. I think he never really found love and, when we come upon him, he’s just on the cusp of changing his whole life and finding the one thing that’s going to make it magical.”

And what about Pacey (Jackson) and Joey (Holmes), who ended the series as a couple?:

I think Pacey and Joey got married. I think they had a family, I think there were troubles. I think they got a divorce. I think that when we meet them they’re in a very dark place. But there’s still something between them that forces them to come together and raise their children. As they seek out happiness with others, they just keep coming back to each other. And they just can’t stop that magical thing that exists between them and that bond they have. I think we would sort of have to watch them fall in love all over again as middle-aged adults.”

Watch a clip from the cast reunion below:

What do you think? Are you a fan of Dawson’s Creek? Would you watch a revival special?

Jack was the first gay character that I could relate to as a closeted gay pre-teen. He wasn’t cruel or scheming toward the other characters as was the popular depiction at the time for LGBT representation. And he wasn’t killed off at a random point in time which, even now, is still an issue.

I remember how the show exploded almost overnight and suddenly the cast was featured on all the magazines at the checkout stands. The cast and crew did a remarkable job creating something that still resonates today.