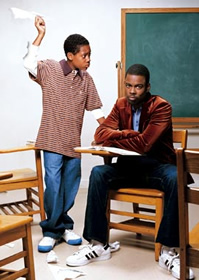 In the network’s commitment to get out of the “sitcom business,” the CW has cancelled Everybody Hates Chris. There won’t be a fifth season but luckily series creator Chris Rock beat them to the punch.

The show’s been around for four seasons and its viewership has been in decline for awhile. It certainly didn’t help that, this season, the CW decided to strand the sitcom on little-watched Friday nights. Added to the fact that Chris doesn’t exactly match the network’s targeted demographic, it was obvious that the show’s days were numbered.

Rather than take a chance on not being able to give the show a proper ending, Rock decided to finish the show on his own terms. The season four finale revolves around Chris dropping out of high school, just as Rock did in real life. If the series had returned for year five, it could have explored his journey to do stand-up but as it is, the season finale still works as a last episode. There’s even a not-so-subtle nod to the famous Sopranos finale at the end.

Williams is currently pursuing a film course at New York University and is satisfied with the final episode. He told TV Guide, “If it ends here, we ended it the right way.” Rock agreed, saying, “It might not be a bad way to go.”

Are you upset or glad that the show won’t be back for season five?

Very upset to see the show end like that I would love to see what happened to Chris! Did he pass his G.E.D? Did he do back to school and repeat 10th grade? This was a great show there’s not many Black Family TV shows and its just “Tragic” There won’t be a season 5! What does the last show tell kids who looked up to this family? Please we LOVE EVERYBODY HATES CHRIS!!!!!

hahahahahahaaaa dude this comment reminds me of mr.omar lol, i love that guy in the show and kill moves.

I’M VERY UPSET THAT THE SHOW ENDED ME AND MY KIDS WATCH IT TOGETHER AS A FAMILY DIDN’T MISS ONE EPISODE.I LOVE THIS SHOW .PLEASE BRING IT BACK

Loved the show. It is the only show that has made me laugh hard in each episode.

I love that show man! I am really sad that ends like this 🙁 comon Chris make them do the show!

It was a really great show…if you dont whant to make $$$ that’s your problem…not with love!

Boo why did it have to end
I loved that show

wtf i love that show they need to do a 5 seasson please!!!!

This was 10 thousand dollars worth of best movie ever!

This is so sad really loved watching it sobssss

I watch “Everybody Hates Chris” reruns over and over. The show was too funny. I simply
loved it. I would love to see a season 5,6,7,8 to say the least.

WE NEED EVERYBODY HATES CHRIS! IT IS A REALLY GOOD SHOW