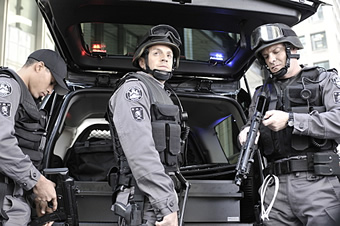 So happy Flashpoint is coming back…it is one of my husband and I favorite programs. So a BIG YEA!!!!

I think this show made a BIG MISTAKE by killing of the black guy! That was soooo sad and I cried so much ! I understand good drama and a good tv plot but honestly I think that was so wrong, How he died ! I no longer want to watch the show.

Out of all the characters on the show, why the black guy had to die with no chance of returning. No storyline after just a replacement.

being in law enforcement for 24 years, this is the best one since Hill Street Blues
We never miss it, thanks for bring it back

ABSOLUTELY LOVE THE SHOW! I’m in the northwest metro from Mpls. What is the ION channel. Can’t find it yet. I’m missing the best show. Need to find it NOW!

I loved the show. I wish it was still on. I miss it.

It’s on ION Television now. I just watched the first episode of the new season earlier this week, on Tuesday at 10pm!

Absolutely love this show do not see it in the fall line up what is wrong with channel 2-
CBS
It is ,my favorite show
Please bring it back

Cant wait for this great show to return.. Please don;t disappoint me!

The new season is supposedly coming to ION, starting October 18th, at 10pm in a two hour block (from 10pm to 12am). I’ll be checking to see if it’s for real, you should too, heh.

We love your show! But the backround music is so loud that it’s difficult to hear the dialog. Please turn that down so we, and others, can continue to watch this great show .
Thank you.

Love the show!!! But the backround music is much to loud!!! Please change that so I and others can continue to watch. Thank you.