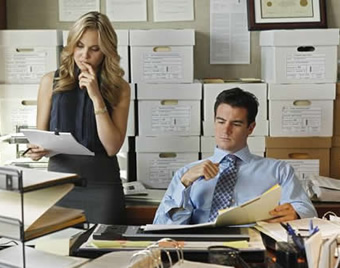 A mid-season replacement series, The Deep End finished its first season in February after six episodes. Many websites erroneously reported that the show had been officially cancelled. It wasn’t then but it is now.

The TV show got off to a rocky start in January with a disappointing 1.8 rating in the 18-49 demographic and 7.07 million total viewers. Viewership for subsequent episodes fell even lower by the time the sixth and final episode of the season aired in February.

There is however still an extra episode sitting on ABC’s shelf. Seven installments were produced but only six aired. If the show had come back for season two, episode seven would have been part of it. Now, fans’ best chance of seeing it will be if the series is released on DVD. For now, that’s not in ABC’s plans but the first six episodes are available via Amazon

What do you think? Are you sorry that The Deep End won’t be back for another round of episodes?

I am disappointed that it was ended. Great cast “Reconsider please”.

This Tv show is awesome!!! It sucks that it go cancelled after just 6 episodes

I just watched this show on Netflix and I have to say I am really disappointed that first it ended in 6 episodes with no real ending and second I actually loved the characters, cast and theme! I enjoy watching law shows and there are not many good ones out there right now. I highly doubt our opinions make any difference but I would really like the show to go on…so not happy!!!

way to often do good shows get pulled before their prime. Just saw this series on Netdlix and think it far surpasses many of the shows airing on ABC’s line up. If you can’t make a season 2 , sell the rights of for a network who knows talent!

wow i just finished the six episodes yesterday, great show, not alot of good lawyer shows out there

I wish that they didn’t cancel this show. I agree with Laura that they really didn’t give the show a chance. They chose a great cast and pulled it too soon. It is a great show and it’s funny too! I wish they could bring it back!!!!!

ITS A GREAT SHOW! BRING IN BACK PLEASE!

I want it back!

They didn’t even give this show a chance to get off the ground! I really got into by the sixth episode and was excited about an upcoming season two.