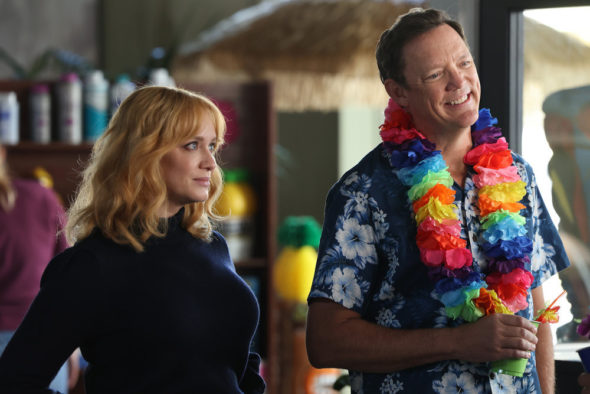 Can Beth, Ruby, and Annie stick together until the very end? Has the Good Girls TV show been cancelled or renewed for a fifth season on NBC? The television vulture is watching all the latest cancellation and renewal news, so this page is the place to track the status of Good Girls, season five. Bookmark it, or subscribe for the latest updates. Remember, the television vulture is watching your shows. Are you?

Airing on the NBC television network, Good Girls stars Christina Hendricks, Retta, Mae Whitman, Reno Wilson, Manny Montana, Lidya Jewett, Isaiah Stannard, and Matthew Lillard. The TV series centers on three suburban moms who’ve struggled to get by. They hold up the local Fine & Frugal supermarket, but their take far exceeds their expectations and they find themselves in deep trouble with the local crime boss. In season four, the stakes get higher as the Secret Service closes in on the women’s counterfeit ring. When we last saw Beth, she was struggling to carve out her own criminal path separate from Rio, using her husband’s spa company, Boland Bubbles, as a front. Ruby seemed to have salvaged her marriage after a rocky road, but only time will tell if her hidden secrets implode. Annie is focusing on inner love and healing as she takes the journey to rebuild independence.

The fourth season of Good Girls averaged a 0.31 rating in the 18-49 demographic and 1.51 million viewers. Compared to season three, that’s down by 25% in the demo and down by 18% in viewership. Find out how Good Girls stacks up against other NBC TV shows.

Will NBC cancel or renew Good Girls for season five? This show has never done very well in the traditional ratings but it’s been renewed year after year, likely thanks to streaming viewership and a co-production and international distribution deal with Netflix. It’s fully owned by NBCUniversal so that certainly helps. I suspect that it will be renewed but, wouldn’t be surprised if it was cancelled either. I’ll update this page with breaking developments. Subscribe for free alerts on Good Girls cancellation or renewal news.

What do you think? Were you hoping that the Good Girls TV show would be renewed for a fifth season? Are you sorry that NBC cancelled this TV series, instead?

I really look forward to The Good Girls every Sunday night! There is one thing that could be improved, and that is the sound along with slowing down their dialogue (speaking) just a bit, so that we could better understand what they are saying. I love the money-making schemes they get involved in; they just need to be a bit zanier and off-the-wall antics they can get into with steamier scripts. Don’t put them in jail, because we love them!! The FBI duo drags the show down a bit…we need more grocery store scenes and every gal being persistent in… Read more »

I hope it gets renewed. Season 4 left us wanting to know what was happening next. I have 3 of my friends started streaming it from the beginning of episode 1 and they can’t stop watching it now.

Good Girls, hope it gets renewed, great show. Found it on Netflix and binge watched and now all caught up with Season 4.

Great Show please don’t cancel !! I watch on hulu and wonder if your able to count this in you rating??

Need season 5 for sure. Love this show. Best I have seen in a long time.

Great show and am wishing for a season 5.

Why don’t you try following a steady schedule with great shows like Good Girls so the viewers now when it’s on. And why don’t you cancel some of your news shows, instead of making up stories.

Love this show, found it on Netflix. I binge watched it to catch up to this season. I definitely love all of the characters too and I hope that Christopher stays on the show. I kind of like that tension between him and Beth.

Please renew. This show is fantastic. Love all the characters which is a rare find. Plus , this show is so entertaining while keeping it real. The women and families struggle financially like real folks. Please renew.