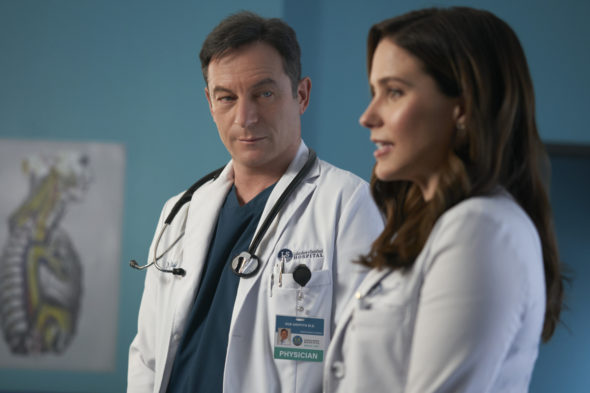 Do CBS viewers want a medical drama? Has the Good Sam TV show been cancelled or renewed for a second season? The television vulture is watching all the latest cancellation and renewal news, so this page is the place to track the status of Good Sam, season two. Bookmark it, or subscribe for the latest updates. Remember, the television vulture is watching your shows. Are you?

Airing on the CBS television network, the Good Sam TV show stars Sophia Bush, Jason Isaacs, Skye P. Marshall, Michael Stahl-David, Omar Maskati, Davi Santos, Wendy Crewson, and Edwin Hodge. In the story, Doctor Sam Griffith (Bush) is a gifted heart surgeon who excels in her new leadership role as chief of surgery at Lakeshore Sentinel Hospital. The former chief of surgery, her former boss and renowned father, Doctor Rob “Griff” Griffith (Isaacs), had fallen into a coma. When Griff wakes up months later demanding to resume his duties, Sam is tasked with supervising this egotistical expert with a scalpel who never acknowledged his daughter’s stellar talent. As Griff defies Sam’s authority and challenges her medical expertise, the big question becomes whether this father and daughter will ever be able to mend their own relationship as expertly as they heal the hearts of their patients.

The first season of Good Sam averaged a 0.25 rating in the 18-49 demographic and 2.20 million viewers in the live+same day ratings (including DVR playback through 3:00 AM). While these numbers don’t include further delayed or streaming viewing, they are a very good indicator of how a show is performing, especially when compared to others on the same channel. There can be other economic factors involved in a show’s fate, but typically the higher-rated series are renewed and the lower-rated ones are cancelled. Find out how Good Sam stacks up against other CBS TV shows.

Will CBS cancel or renew Good Sam for season two? While the network has plenty of crime and procedural dramas, CBS doesn’t have any other medical dramas on the schedule. That could help the series’ chances but, it’s also the lowest-rated scripted series on the network. Good Sam could be renewed but I think it will most likely be cancelled instead. I’ll update this page with breaking developments. Subscribe for free alerts on Good Sam cancellation or renewal news.

5/13/22 update: Good Sam has been cancelled so there won’t be a second season on CBS.

What do you think? Were you hoping that the Good Sam TV show would be renewed for a second season? Are you sorry that CBS cancelled this TV series, instead?

Cancel, cancel, CANCEL!!! The actors are all well & good, but the storyline is TERRIBLE!!! Too many triangles – that also overlap! There is no decent depth to the individual characters to make us root for them, much less like them. The few characters that could have been developed well were ruined by terrible storyline. We watched the entire season but I will be absolutely fine to see this one not return!!!

Exactly, the show was horribly written and just unrealistic.. So now it is cancelled because it never found an audience.. repeats of other shows did better in that time slot.. Katie Wech who created, wrote and produced the show offered bland scripts bordering on being juvenile. Even good actors couldn’t save it.. it was a trainwreck

Yep, but Sophia Bush fans love her so much they will defend this show to the death. lol

Good Sam is great please renew. You have to market the show.

My wife and I made it through 8 episodes before pulling the plug. Possibly the worst medical show CBS has ever aired. Let it rest in peace.

Totally agree! We watched to the end in hopes of improving but we just found ourselves liking it less and less!

Seriously. Code Black was the best medical show they had, even if it did go down in quality by the end.

I love the show! Please renew it!

I love this show please save it. Give the over 50 group, something please.We purchase stuff we see on TV we go to Resturants.

Nothing, huh? Is that why it lost out to Chicago P.D. repeatedly, including reruns? lol

I love the show, please renew for a second season. Sophia Bush is a great actress.

The show is absurd. It should be a comedy. Real doctors and nurses are rolling on the floor laughing at how Good Sam portrays hospital staff. Unrealistic unintentional comic relief

Agreed. Sophia’s fans are just in denial, because they want to see her on tv.

I love medical dramas but this is like a soap opera on steroids. It should be called Bad Sam, or Criminal Nepotism. It’s absurd! It’s R

I’m enjoying Good Sam and would like to see a second season.

I can’t stand to watch this. The leading female actress has a horrible voice. Raspy/ croaky/ impossible to understand . Replace lead with someone else, and get better scripts.

Unfortunately, she’s always had that voice. Since One Tree Hill. It drove me nuts on there, and she’s the reason I avoided Chicago P.D. at first. I finally started watching it, because of the rest of the cast DESPITE the fact she was on it. Her voice is just….grating.

Please renew this show. We look forward to it each week and love the characters and twists and turns in each episode.

I hope Good Sam is renewed.