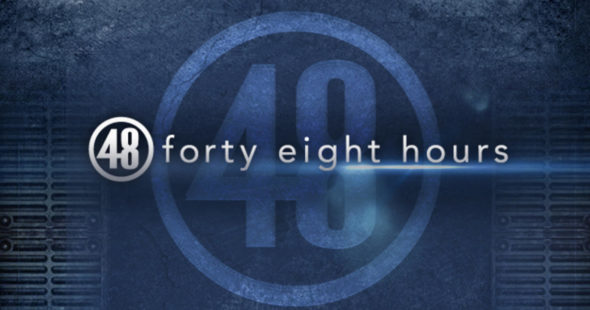 What strange new cases will be covered? Has the 48 Hours TV show been cancelled or renewed for a 35th season on CBS? The television vulture is watching all the latest cancellation and renewal news, so this page is the place to track the status of 48 Hours, season 35. Bookmark it, or subscribe for the latest updates. Remember, the television vulture is watching your shows. Are you?

Airing on the CBS television network, the 48 Hours TV show dives into the most intriguing and compelling true crime cases. The series, which premiered in 1988, has developed a rich history of original reporting and impact journalism that has helped exonerate wrongly convicted people, caused cold cases to be reopened and solved, and, along the way, changed lives. Correspondents include Maureen Maher, Erin Moriarty, Richard Schlesinger, Tracy Smith, and Peter Van Sant.

The 34th season of 48 Hours averages a 0.32 rating in the 18-49 demographic and 2.83 million viewers. Compared to season 33, that’s down by 3% in the demo and even in viewership in the live+same day ratings (including DVR playback through 3:00 AM). While these numbers don’t include further delayed or streaming viewing, they are a very good indicator of how a show is performing, especially when compared to others on the same channel. There can be other economic factors involved in a show’s fate, but typically the higher-rated series are renewed and the lower-rated ones are cancelled. Find out how 48 Hours stacks up against other CBS TV shows.

Will CBS cancel or renew 48 Hours for season 35? This show is a staple of the Saturday schedule and it’s likely to continue for years to come. The network may want to make a change at some point but I can’t imagine CBS passing up the chance to celebrate 48 Hours’ 35th anniversary season. I’ll update this page with breaking developments. Subscribe for free alerts on 48 Hours cancellation or renewal news.

What do you think? Do you hope that the 48 Hours TV show will be renewed for a 35th season? How would you feel if CBS cancelled this TV series, instead?

With regards to “48 Hours” on CBS Saturday nights at 10pm, as of Sept. 18th, aren’t we watching the 35th season already? Official status on this post says “48 Hours” hasn’t been cancelled or renewed for its 35th season. I’m confused. Can someone please clarify? Thanks.

Good eye. The long and the short of it is that CBS seems to have skipped season 32. In their press release about the Fall 2018 premiere, CBS touted 48 Hours’ season 31 debut. A year later, the network announced the show’s Fall 2019 debut and called it season 33. On CBS.com and Paramount+, the current season’s episodes are listed as being part of season 34. Maybe they’ll fix the error at some point or maybe not.