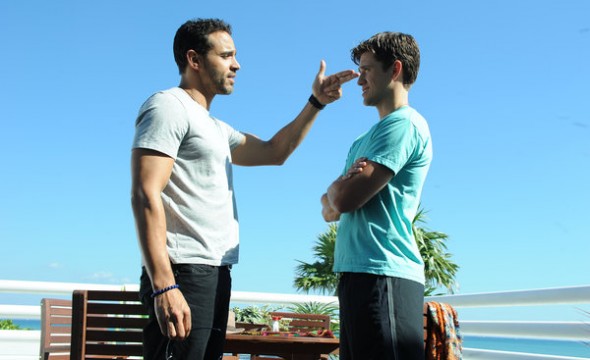 USA Network has renewed Graceland for a second season. The cable channel has ordered 13 new episodes for 2014.

To date, the first season of Graceland has averaged 2.25 million viewers. It’s currently the lowest-rated drama on USA but apparently the cable channel wants to give the series more time. The season finale airs this Thursday, September 12th.

What do you think? Do you like Graceland or do you think it should have been cancelled instead? Are you looking forward to season two?

LOVED watching Graceland…one of the highlights of the week! With Burn Notice and Psych ending, you need to keep an interesting detective show on. This show mixes several elements and it works! Please bring it back soon!!!!

This show is awesome. Please do not cancel it.

Graceland is a great darama!!
So tired of the over rated “reality” shows. They are so far fetched!!
It’s smart for whoever decided to give Graceland more time because it is a good show, the characters are reat, and the lines are great as well!! Rally the troops to keep this show ON!!!

They should keep this show around for a long time.

Show as very entertaining and ORIGINAL – perhaps it’s because it’s based on a true story. Hollywood doesn’t seem to have an ORIGINAL idea so they don’t know what to do with one. Glad someone had the good sense to give it another chance,

Really enjoy this show, sure hope it’s not cancelled! Looking forward to start of the second season.

Loved this show. I really hope they don’t cancel it!

Awesome show!!!!! Can’t wait for new season to start I have all my friends hooked on it. best on USA

Awesome show!!!!!! Can’t wait for new season to start. I have all my friends hooked on it. best show on USA please hurry up with new season. The sooner the better!!!!!!

This series is the best one on USA 😀

I love the show trying to find out when the new season starts. It;s a good acton pack movie

Great show. It is good that it is coming back in the summer of 2014

Is it or is it not renewed and when? I loved the show. I really hope there will be another season. The characters were awesome unique, interesting.
.

LOVE LOVE LOVE Graceland!!!!!! So glad to hear it will return—-

I really loved the show i cannot wait for it to air again it is one of those shows that once you start watching it your hooked.

I love the show, glad it got renewed. Can’t wait for the new season to start