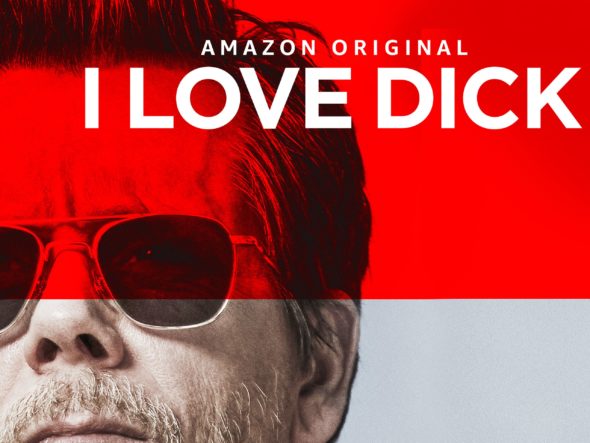 While virtually everyone loves bacon, not the same can be said of Dick. Amazon has cancelled its I Love Dick TV show after one short season. The half-hour series, from Jill Soloway and Sarah Gubbins debuted as part of Amazon’s pilot season on August 19, 2016, with the first full season premiering on May 12 of last year.

An Amazon original, I Love Dick stars Kevin Bacon, Kathryn Hahn, Griffin Dunne, Roberta Colindrez, India Menuez, and Lily Mojekwu.  A TV show adaptation of the Chris Kraus novel, I Love Dick centers on NYC Indie filmmaker Chris (Hahn). After her film is pulled from the Venice International Film Festival, she ends up in artsy Marfa, Texas, where her writer husband Sylvère (Dunne) is spending a year in residency at the Institute, run by acclaimed artist Dick Jarrett (Bacon). Meeting Dick upends their marriage and lives.

Today, Amazon also cancelled Tig Notaro’s One Mississippi, as well as Jean-Claude Van Johnson. On the upside, earlier today, they renewed The Tick for season two.

I Love Dick was creator Soloway’s follow-up Amazon series to her Golden Globe-winning family comedy Transparent. Despite a big-name cast led by Kevin Bacon, the series did not connect with audiences the way Transparent has. Amazon Studios still remains in the Soloway business with a big overall deal for future series.

What do you think? Have you watched the first and only season of the I Love Dick TV series? Did this Amazon TV show deserve to be cancelled or renewed for a second season? Sound off, in comments.

Well that blows. Watched season 1 2x now. I loved the characters and the humor. Too bad

Cancelling Kevin Bacon in I love Duck major judgement error. It was fabulous and I am highly disappointed in Amazon Prime

We are condemned to watch **** because is what the great mass of people likes… simple as that … and the more **** the people a watches stupidity grows and grows… till nothing is left…
just for the record I LOVE DICK one of the best things I saw lately. Bacon its good, really good

Loved it!! What the heck? So much other crap on there that I would never watch

I’m curious to which audience members this clever, witty, brilliantly acted show did not connect? You’d have to be a corpse to hate this show. I binged this season in 1 day! Loved, loved, loved it! Then again, anything with The Bacon and Hahn is guaranteed gold! So disappointed I can’t watch a 2nd season. The powers that be made a mistake cancelling.

This is so disappointing! Just watched season 1 and am bummed there’s no season 2!! This was funny, highly entertaining and Kevin is still so sexy!!! Please reconsider.

Why did this show have to be cancelled? Finally a show talking to and about females and it’s pulled.

So so very disappointed this show was cancelled. I found it brilliant and extremely well acted! Finally something good on TV and it’s cancelled after one season!!

I am so disappointed but not surprised to hear that the brilliant show, I Love Dick, has been cancelled. It is so rare to find a truly unique show with intriguing characters and a presentation where the audience cannot predict what will happen next. Such a loss!

I love Dick was an excellent watch! It was funny and quirky and sexy and real. Definitely disappointed there won’t be a second season. Booo!!

We loved it! Artsy, Edgey, interesting and a bit kinky. definitely good enough to deserve a second season. But, another of those things you come across from time to time that are just “not for everyone”. I can relate to that, but we LOVED it!

I am so sad to hear that I Love Dick has been cancelled. It is a brilliant show, specially because it gives a voice to female desire and represents women in all their honesty. It’s so sad that Amazon has only decided to cater for larger audiences when they were just starting to look like they were doing things a little differently.