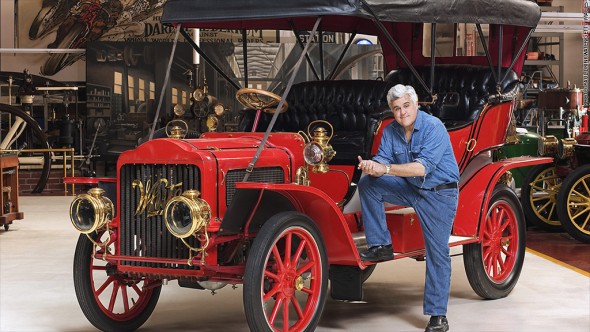 CNBC is returning to Jay Leno’s Garage. Recently, the network announced the TV show’s fourth season will premiere next month.

In the premiere episode, the movie car is finally the star of the show! Jamie Foxx shows Jay that he’s no baby driver when it comes to doing his own stunts. Then Jay and Bond stunt driver Ben Collins recreate the iconic chase scene from “The Spy Who Loved Me.” Jay gets an exclusive look at the original Mustang Steve McQueen drove in the film “Bullitt.” And musician James Taylor gets reunited with the car from his cult classic film “Two Lane Blacktop.” It’s an action-packed look at the cars that co-star in some of our favorite films.

“Jay Leno’s Garage” takes the fast and the furious car fan for a high-octane spin across the country with a mix of stunts, reviews, celebrity interviews and challenges. As well as putting some of the world’s most amazing vehicles through their paces, Jay meets fellow car enthusiasts from who he’ll discover the touching, hilarious and sometimes hard to believe stories that make these cars more than just rubber and metal. There’s no wheel Jay won’t get behind to tell the story of our love affair with the automobile.

What do you think? Have you seen Jay Leno’s Garage? Will you watch season four?