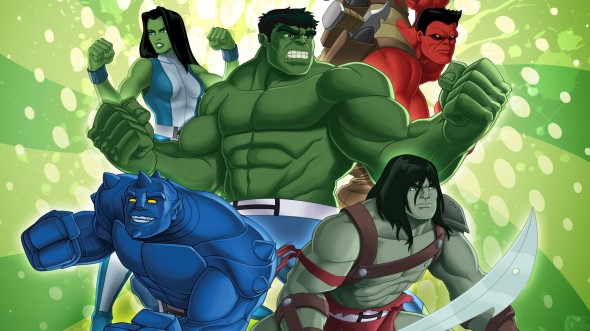 DisneyXD has ordered second seasons of both Marvel’s Avengers Assemble and Marvel’s Hulk and the Agents of SMASH. The episodes are currently in production and are expected to start airing this fall as part of Marvel Universe on Disney XD.

Disney XD has ordered a second season of its popular animated series on the Marvel Universe programming block, “Marvel’s Avengers Assemble” and “Marvel’s Hulk and the Agents of S.M.A.S.H.” It was announced today by Jeph Loeb, Marvel’s Head of Television, at San Diego Comic-Con. Produced by Marvel Television, some of Marvel’s most popular super heroes – the all-star Avengers and hard-hitting Hulks – will return to take on their most high-stakes battles yet. Both series are in production and slated to premiere this fall on Marvel Universe on Disney XD.

Season two of “Marvel’s Avengers Assemble” takes the Earth’s Mightiest Heroes to all-new heights, as the threat of the cosmic warlord Thanos hangs over the team, threatening to destroy them. The Avengers will have to unite and wield their powers to defeat some of the most infamous villains in what promises to be the super heroes’ greatest challenge yet. The voice cast includes: Adrian Pasdar (“Heroes”) as Iron Man, Fred Tatasciore (“Kung Fu Panda: Legends of Awesomeness”) as Hulk, Roger Craig Smith (“Wreck-It Ralph”) as Captain America, Travis Willingham (“Shelf Life”) as Thor, Troy Baker (“Ultimate Spider-Man”) as Hawkeye, Laura Bailey (“The Super Hero Squad Show”) as Black Widow and Bumper Robinson (“The Game”) as Falcon. Man of Action Studios (“Marvel’s Ultimate Spider-Man,” “Ben 10”) – comprised of Joe Casey, Joe Kelly, Duncan Rouleau and Steven T. Seagle – will serve as co-executive producer.

Disney XD is a basic cable channel and multi-platform brand showcasing a compelling mix of live-action and animated programming for kids age 6-11, hyper-targeting boys and transporting them into worlds full of humor, unexpected fun and inspiring action-filled adventures. Disney XD-branded content spans television, online, mobile and VOD platforms. The programming includes series, movies and short-form, as well as sports-themed programming developed with ESPN. In the U.S., Disney XD is seen on a 24-hour, advertiser supported network that reaches over 80 million households via its basic cable and satellite affiliates. There are 30 Disney XD channels available in 25 languages around the world.

Marvel Entertainment, LLC, a wholly-owned subsidiary of The Walt Disney Company, is one of the world’s most prominent character-based entertainment companies, built on a proven library of more than 8,000 characters featured in a variety of media over seventy years. Marvel utilizes its character franchises in entertainment, licensing and publishing. For more information visit marvel.com.

What do you think? Does anyone in your house watch either of these Marvel series?

You can watch both Hulk and The Agents of Smash and Avengers Assemble on http://www.watchcartoonsonline.com

I looooove both of the tv animated series but it’s so weird that they’ve
Never put bruce banner! I was so of course they put him in avengers assemble
Episode 15… But I have to see hulk calming down!!! Every time I
See him calm down I feel crazy hyper and AWESOME I SAY IN MY MIND…
HULK I-IS AWESSSOOME!

Uhh I got a little missed up when I said (I was so)
Idk why I said/typed that???

IDK man but that’s why I just download the shows I like cause then I don’t worry about not finding it on DVD.

Hulk and the Agents of Smash is out on DVD August 11th, Avengers Assemble is already on DVD so you should be able to find it.

I’ve googled exhaustively, and I have not found either show’s complete season one available. I know there is the “assembly required” avengers dvd, released a few months ago. But that only includes the first five episodes of the series, not the entire season. and there is a “united we smash” hulk dvd pending, but as best I can tell, this is not a full season one release either. also, on the marvel animated wiki pages it still stays n/a on dvd releases (tho I know s.ometimes wikis are not updated that often)

Is there any clue anywhere when either of these shows will have full season 1 DVD releases? Seasons are complete, but I can’t find any info.

You can see the first season of Avengers Assemble on Netflix, Hulk and the Agents of smash hasn’t come out, but probably will soon.

I’m so glad that Hulk and the Agents of S.M.A.S.H and Avengers Assemble have been picked up for season 2, these shows are both really good! Hulk and the Agents of S.M.A.S.H
is so well done and so funny and the adventures are full of heart, humor, good lessons, things to think about, advice on being a better person and plenty of action. I also love when Spider-Man is on an episode those ones are always hilarious!

I read last yr that Hulk and AOS were intended for one season. But i’m surprised they renewed it.

Had no doubt bout the Avengers being picked up.

Avengers Assemble is good but some of the episodes are pretty heavy once is enough but Hulk and AOS is light and fluffy and you can watch them over and over and laugh every single time!