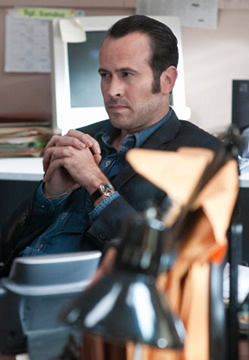 TNT is reportedly close to a sealing a deal to renew Memphis Beat for a second season. The cable channel previously gave a renewal to fellow freshman drama Rizzoli and Isles.

What do you think? Does Memphis Beat deserve a second season? Is it worth watching?

Memphis Beat should certainly be renewed.

My husband and I love Memphis Beat! We are eagerly awaiting its renewal!

I loved loved Memphis Beat and hope it comes back. Had me glued every episode to see how Dwight would solve and what song he would sing. Jason Lee IS Dwight and so much better than Earl. I hope this show comes back.

I thought maybe the show was cancelled and was very disappointed. With all of the junk on TV these days, Memphis Beat is a multi-facited show with its interesting story lines and characters. I vote for another season with more episodes!

Memphis Beat should certainly be renewed. Good story lines and great music. Getr rid of the duds and keep this great show.

I really enjoy the show. It is different and not heavy emotionally. I also like the music very much!

The BEST series in many years! I agree, it should be renewed! It’s an awesome, creative, feel-good show. Not one of those “cookie-cutter” crime shows, but rather something refreshingly new and different. Just love Jason Lee (an under-rated, underappreciated very talented actor who is sure to continue to do well & who will go very far in his career), the entire cast is tops and Wow! Great Music! I love the “tradition” established by the show where Jason Lee ends each show with his own version of a classic R&B number – it always leaves me feeling good about the… Read more »

This is absolutely a show that needs to be renewed. Smart writing and intelligent subject matter are not the norm on TV. Please return to TNT soon!

Correction from above.
. . . . . Probably the reason of low viewership is because it ISN’T idely promoted on other channels. I’m glad I can across it by chance.

PLEASE Please renew this show. My son (23) & I absolutely love this show and the music is great. I think there is a smile on my face the whole time I’m watching. I love Jason Lee in this role – wasn’t a fan of “Earl.”
Everyone is great. Probably the reason of low viewership is because it widely promoted on other channels. I’m glad I can across it by chance.

Please renew for another season. We all love this show! It’s quirky, different than all the others, love the music and the actors. They don’t look like your typical “hollywood” teen scene!

Hubby and I enjoy Memphis Beat, a little different scenerio from LA, etc. ….nice to have a bit variety….good cast

Definitely worth another season. I really enjoyed the show.

Keep MB! Slightly off-beat, not a lot of violence, love the music. Never cared for “Earl” buy Dwayne’s got it ……