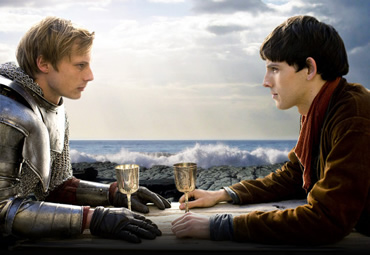 It’s the news that fans of Merlin have been waiting for. Syfy isn’t repeating NBC’s decision to cancel Merlin after one season.

As you may recall, NBC ran the first season of the BBC program last summer. The ratings weren’t very good so they cancelled Merlin. Fortunately, the program moved to another NBC-Universal company for season two.

Season two of the fantasy series ran on Syfy from April until early July and attracted an average of 1.7 million viewers. That’s good enough for the cable channel to want to renew the show for season three.

Of the news, Merlin creator/executive producer Johnny Capps said, “We are thrilled that Syfy will be broadcasting the third series of Merlin… The upcoming season will add an exciting new twist to Merlin’s ongoing struggle to protect Prince Arthur, as well as thrilling audiences with bigger and bolder action sequences, stunning CGI monsters, mysterious villains and comic fun for all the family.”

The BBC had already ordered a third season of 13 episodes last December. Filming reportedly got underway in Wales in March.

There are no specific dates yet but it’s expected that season three of Merlin will begin airing in the UK in the latter part of 2010 and pop up on Syfy in early 2011. No word on the release of season two on DVD.

What do you think? Are you glad to hear that Merlin is returning to Syfy for season three?

i never watched syfy, never cared for it really, im into the old stuff, and i hae to tell you imj an advid syfy watcher because of merlin

I’ve been a fan of Merlin for years now and I’m glad SyFy decided to keep Merlin an ongoing series. After seeing the series so far, I have decided that the actors chosen to play the characters have been truly amazing. Now that I have Sling technology with DISH Network, I never miss any of the shows. I live a very busy life and I use my iPhone to see these shows while on my lunch break at work. Being that I am a customer and employee of DISH, I can’t recommend the TV Everywhere feature enough to anyone with… Read more »

THE PART OF MORGANA IS SOME WHAT ANNOYING BUT INTERESTING… BUT I LOVE TO WATCH THE MAGIC PART. ESPECIALLY THE APPEARANCE OF THE GREAT DRAGON. WHEN THE DRAGON STARTS TO ACT AND TALK, WOW, MY INTEREST IS UP INTO MY BRAIN

i M very glad that Merlin is coming back. this is the only movie that i have waited for the long weekend. and now that merlin is not been showing, i have no interest in the television to watch anymore. i must say, I WANT MERLIN TO COME BACK TO SYFY CHANNEL OR WHAT EVER CHANNEL IS IN. IN THE FAMILY CHANNEL WILL BE GOOD.
I LOVE MERLIN. WILL U PLS AIR MERLIN ALL THE SEASONS., I HAD MISSED A LOT OF SERIES

sometimes you just need something fun it’s entertaining to me

ABSOLUTELY!
this is a really great show, extremely enjoyable, I am sorry I apparently didn’t find it in the beginning and if it doesn’t continue I will be extremely disappointed
love the actors, except Morgana, of course, but she does the part well

Wonderful series. My husband and i enjoy it very much and so some of our friends. Hope they keep it up. It’ s my “comfort” program. Love it

Please keep renewing Merlin . . . I love the way Merlin and Arthur relate too one another. It it great fun to watch and I look forwarde to it each Friday.

Please keep Merlin in production!! I love the show!

i can’t hardly wait on seasons 2 & 3, even more seasons from this marvellous movies from Merlin on dvd region 2 with dutch subtitles.

I’m surprised it wasn’t cancelled and there’s a season three at all. This is one dull series.

i would love to see reruns

I love the Merlin TV show and can’t wait for the next one.

I love it. 63 years old. I spend a lot of money on advertisers.

Is Merlin coming back for 4th season? Or was the 3rd the “series” finale? Do you know?

Dala » It’s been renewed in the UK but not produced yet. Syfy hasn’t decided if they want season four yet.