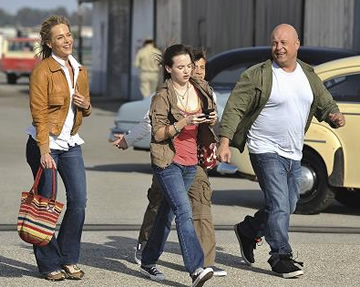 Last night, ABC unveiled their much-anticipated new TV show, No Ordinary Family. Were the ratings heroic or will the family and their adventures soon be cancelled?

According to the Nielsen ratings, No Ordinary Family attracted a 3.2 rating in the 18-49 demographic and 10.69 million total viewers. For the timeslot, it ranked in second place in both categories.

Considering that it aired opposite a hit show like NCIS: Los Angeles (which had a 3.7 rating and 16.51 million viewers), No Ordinary Family had a very good debut.

We’ll have a better idea about the show’s future in the next couple weeks as we see if the show’s audience grows or significantly shrinks. For now it looks to be in really good shape.

So, what do you think? Did you tune in to see the first episode of No Ordinary Family?

Will you watch next week? Cancel or keep it?

No Ordinary Fmaily has been a great. To my estimation the attraction was growing but not at a fast pase. I have introduced persons to the show and it has become an addiction for them. I enjoyed it and with there would be more like it in the near future.

keep the show it’s one of my favorite shows, even if you have to put it on a different time and day KEEP IT!

LOVE IT! keep it going….

Don’t cancel the series. I have been following it over here in Asia on your fox channel here and I make sure I catch ever show. I was disappointed when I watched it last night and then I seen they were putting a rerun of a rerun of a rerun in its place starting next Monday. Keep it on and give them a fair chance. I love the whole cast on the show! Why do you guy’s always cancel something that may have a good chance in gathering a large following. They didn’t even advertise that that was the final… Read more »

DON’T CANCEL THE SERIES. IHAVE BEEN FOLLOWING IT OVER HERE IN ASUIA ON YOUR FOX CHANNEL HERE AND I MAKE SURE I CATCH EVER SHOW. I WAS DISAPPOVED WHEN I WATCHED IT LAST NIGHT AND THEN I SEEN THEY WERE PUTTING A RERUN OF A REUN OF A RERUN IN IT’S PLACE STARTING NEXT MONDAY. KEEP IT ON AND GIVE THEM A FAIR CHANCE. I LOVE THE WHOLE CAST ON THE SHOW! WHY DO YOU GUY’S ALWAYS CANCEL SOMETHING THAT MAY HAVE A GOOD CHANCE IN GATHERING A LARGE FOLLOWING. THEY DIDN’T EVEN ADVERTISE THAT THAT WAS THE FINAL SHOW… Read more »

This was the first decent show in decades. Please let us see more. I have stopped watching ABC for now.

I love this show you can’t leave us with that much of a cliff hanger like what powers would gorge get????

i LOVe no ordnary family! they should NOT have canceled it! i mean everything happened in the last episode! they cant just leave george getting super powers and katie having a super child and joeshua coming back and dr.king dying! it’s stupid!!!!!! bring the show back PLEASE!!!!! it maight be showing at 10EST time but idk… PLEASE *100000001million (hey tht would b a catchy benfit night name 4 it) BRING BACK NO ORDINARY FAMILY!!! the only REALLY good shows on TV r pysch, bones and NO ORDINARY FAMIYL!!!!! at least b alittle like hannahmontanah and comeback for a half season,… Read more »

I think that it should stay on because it is a family show and how many show that have families that are together and they are, NO ORDINARY FAMILY. Keep them coming, and I’ll keep tunning in.

Hello pleasr keep no ordinary family on the air i’ve nevrr use to watch abc family since the day show come in I always make dure tune in every tursday to watch each episode. If one I missed one i go online and watch it.

In my opinion “no ordinary family” is the best show that ABC has come up with in a long time, I can’t get enough of it. Please don’t cancel this show.

ABC please keep No Ordinary Family on your schedule. For years I have passed on ABC shows for those on other stations. This show has given me something to truly look forward to week after week. A show the whole family – no matter how young or old the family members are – can watch. Keep it alive!!

For those out there that want a Season 2, visit https://tvseriesfinale.com/tv-show/no-ordinary-family-petition/ for ideas on how to be heard.