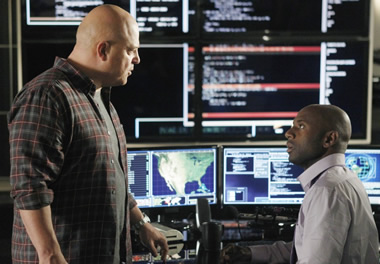 As if there weren’t enough signs already that ABC’s No Ordinary Family is doomed to be cancelled, the network has given us another one.

The TV series, about a super-powered family, has been struggling in the ratings for quite awhile and currently averages just a 1.9 rating in the 18-49 demographic and 6.67 million viewers. Last week’s episode attracted only a 1.2 demo rating. ABC also recently cut the episode order from 22 to 20 installments.

Just days after production wrapped on what will likely be the final episode of No Ordinary Family, the show’s stars signed on for new CBS shows. Michael Chiklis will star in a new sitcom pilot called Vince Uncensored. Julie Benz has signed on for an as-yet-untitled supernatural medical drama, co-starring Patrick Wilson. (These are technically in second position but it’s certainly not a good sign.)

And now, ABC has decided to air the second-to-last season episode on a Saturday night. The network has pre-empted No Ordinary Family on March 29th with an hour special, Dancing with the Stars: The Story So Far. There are two episodes left so one will air this Saturday, March 26th, at 10pm. The finale will then air on Tuesday, April 5th, at its usual time.

What do you think? Is there still a chance that No Ordinary Family will be renewed?

You have so many devoted fans. Im extremely sad that it is cancelled. You left us filled with unanswered questions. I believe it should carry on. I believe in it…..

I love to watch this show with my family. There are so many non traditional tv watchers now. Please make a season 3. It would be great to see this grow. The facts of life was a great tv show that lasted many years, but it struggled at the beginning too. Today the networks give up on great shows like firefly and play annoying ones that some people don’t even turn the tv on for. By the way, how do they get ratings, I don’t remember ever being polled.

The final episode of No Ordinary Family has just recently finished last week here in the Philippines. I was certain that there’ll be great things that will happen on season 2, but I am disappointed on finding out that it is cancelled. It is surely a great show, It helps family bonding. Aside from that it has a great plot. They shouldn’t cancel this kind of show, what they should cancel are those bunch of crappy shows that only promotes garbage mentality.

Why get rid of it, its one if the best show on BBC let alone on television period!!!

A lot of people are now using internet to watch the shows!!
people love superheros and those which are like you have great potential.
The last episode open the doors for a great season 2!!! Get additional creative help, but consider season 2!!! Abc…. Executives…. Awake to a new internet reality!!

NOT FAIR!!! it’s the only show my parents would actually sit down to watch with me making it our family thing…don’t be stupid and cancel it.. just advertise it more…ppl arent watching cos they dont knw about it not cos it’s a bad show…IT’S REALLY GD!!!! don’t do it plsssssssss

This Station Always Dumps The Shows That Can Bring Familys Together , For Shows that do nothing to Help People come Together.This is the last time i Turn on This Channel. Bank on that

It is a shame that this show is being cancelled. There are very few non-reality, non-cable shows out there that are family friendly. It is so rare now to find a show that a family can watch together that is geared to “tweenagers”.

WHY? THIS IS A GREAT SHOW, WHY IS THAT SHOW THATS GIVE FAMILY VALUE AND A FAMILY WORK TOGETHER WITH LOVE, BUT A SHOW LIKE SIMSON WHICH SHOWS NO FAMILY VALUE GET TO STAY ON. HOW? HOW? LEAVE THE SHOW ALONE JUST INPROVE IT, AT ALL LEVEL.

Don’t be NBC and be stupid don’t cancel programs before they are given an honest chance to prove themselves and catch on. This a great show with tremendous potential for gaining future viewers. I am getting tired of networks that continue to refuse to give good programing a chance and continue to promote garbage shows. Keep this one.