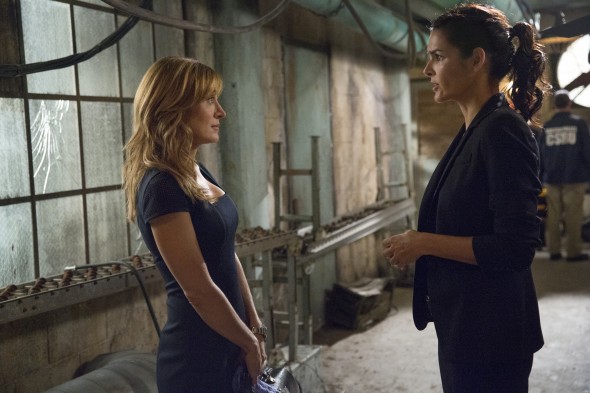 Rizzoli & Isles is getting ready for its final season on TNT, but one star was open to the long-running series continuing on another network.

This is not out of the norm today. Hulu saved The Mindy Project after FOX cancelled it, and Unforgettable aired a fourth season on A&E after CBS axed the series for a second time.

Sasha Alexander spoke about the series cancellation in an interview with The Hollywood Reporter. She said the following:

“It would have to depend on the deal and if it made sense or not. I’ve been working on Shameless for the past couple seasons as well so I’m looking forward to playing different roles but that doesn’t mean that I would have said no. I think it would just really have to depend on the situation because sometimes they move it to a [new] network but then they move you to Vancouver; it doesn’t mean that it would stay the way it is and just continue. This has been a really stellar job because it’s in L.A. and I have kids and so it’s really worked out in a very big way, but the interesting thing is also, you step into doing a pilot and they sign you for six years or seven years of your life and there are not many jobs like that. Even in the Army, you get to change barracks every two years. (Laughs.) To go that seven years is so rare and I think you have to enjoy it while its there and know when its time to move on. … At least we’re ending on an up. It’s really a bummer when you watch shows and they’re on for so long that you feel like they’ve exhausted every possible story you could ever tell, and I feel like that hasn’t happened to us.”

The seventh and final season of this series will air later this year. Were you surprised by the cancellation of this TNT series? Would you watch it on another network if the series moved? Tell us what you think.

I would with out a doubt keep watching this show should it be picked up by another network. I also have been watching Rizzoli and Isles since it first aired and hate to see it leave. It’s one of the best shows out there, so please someone keep this show going!

I would definitely watch this show if they put it on another channel. I love this show! Strong female role models who don’t need a man to validate them, and interesting story lines. What’s not to like?

It is heartbreaking to me that Rizzoli and Isles will no longer be on. I have watched this show from the beginning. I hope another network decides to pick it up.
Such a great show, sad to see it go.
#bringbackRizzoliandIsles

We record and watch this show every week. I am so disappointed that they are ending. I was hoping another network would pick them up and continue the same storyline. I adore all of the characters. Everytime a great show comes on, I swear they figure out how to end it.

I love this show and don’t understand why the network is cancelling it. Would most certainly watch it if another one picked it up. It’s a shame when good shows are cancelled while the trashy ones stay on!!

Love the show and hope another network will pick it up! Great show and sad to see it stop, not much to watch on TV these days!

Yes, I would watch it as long as I can stream it on Hulu. I don’t have cable and Hulu is the only way I can get the show. Loved everyone on the show.
Except they should make the man that plays Angie’s brother Frankie goofy at times. Even when they put Tommy on he had a strong character then made him goofy. But, the show is great.

Well now it’s official every station I get has dropped one of my favorite shows. #1 Rizzoli and Isles. I am getting only reruns right now as I don’t get TNT and the scheduling is different in Canada, which is crappy in its self,…but I thought this particular show was massively popular. So now I am seriously thinking of cancelling my TV and going straight to Netflix only. Seriously Castle and Rizzoli and Isles. You networks all are listening to some awfully ignorant people.

Absolutely would watch on any channel! Love all the characters.

I would watch it on any channel. Love, love love this show.

Love it would watch it on any channel.

I love this show I look forward to it coming back every season. I also think it has a great cast.
Would watch it on any channel.

I thought TNT was a better network because of shows like Rizzoli and Isles, The Librarians and The Last Ship. I would definitely be loyal to the shows and follow them.

Since this is one reason I watch TNT then I would definitley switch to another channel to watch the best show on TV.