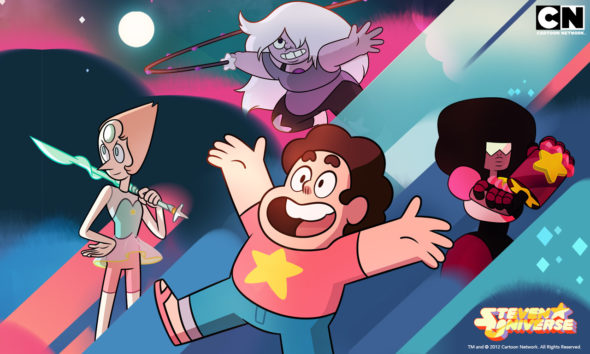 Steven Universe fans don’t have to wait much longer. This week, Cartoon Network announced season five will return in November.

Season five of Steven Universe returns to Cartoon Network on November 10th via the network’s app. All episode will then air on TV in December.

Picking up at the end of the series’ critically acclaimed “Wanted” four-episode arc, Steven Universe returns with “Dewey Wins,” in which after returning to Beach City from Homeworld, Steven helps Mayor Dewey run a difficult campaign.”

Fans can also watch all six episodes when they air on Cartoon Network, beginning in December. In the meantime, additional multiplatform offerings include:

Steven Universe: Save The Light

The highly anticipated console game Save the Light, featuring game-exclusive villain Hessonite, will launch on Oct. 31 for the PlayStation(R)4 computer entertainment system in North America and Latin America and Nov. 3 on Xbox One globally. It is available to preorder now on Xbox One through the Xbox Games Store.

The chart-topping digital album Steven Universe Soundtrack: Volume 1 will be released on vinyl in December. Fans can preorder the vinyl album at iam8bit.com.

Due to popular demand, Cartoon Network will release its first single, a brand new song from Steven Universe, shortly after the song debuts on air in an upcoming episode.”

What do you think? Do you watch Steven Universe? Are you excited about the new episodes?