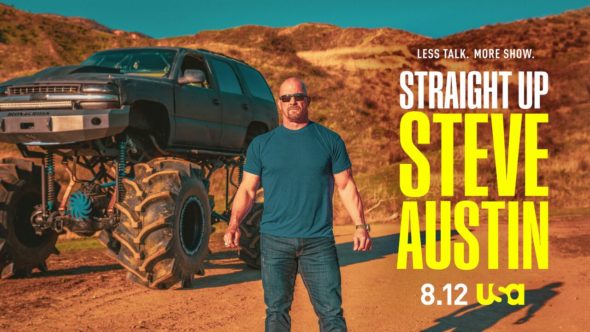 Straight Up Steve Austin is returning to USA Network for its second season, and a premiere date has now been set. The series follows retired professional wrestler “Stone Cold” Steve Austin as he travels to places for one of kind adventures.

USA Network revealed more about the return of the series in a press release.

“USA Network is set to bring audiences straight up good times and family fun in the new year as the network unveiled January premiere dates for three of its unscripted series, including the return of the breakout hit Straight Up Steve Austin for its second season on Monday, January 11 at 11pm ET/PT; new episodes of the favorite series Chrisley Knows Best on Thursday, January 21 at 10pm ET/PT, immediately followed by the launch of the new family docu-comedy “The Rev” premiering at 10:30pm ET/PT.

In Straight Up Steve Austin, WWE Hall of Famer “Stone Cold” Steve Austin and a celebrity guest get real, heading out to different cities across America to take part in one-of-a-kind adventures, while swapping stories about their lives and careers. It’s a unique twist on the standard interview show, with no studio, no couch and no cue cards — just a straight up good time and good old-fashioned American fun. Season one was 2019’s #1 new unscripted cable series for men between the ages of 18-49 and 25-54.*

Check out a preview for the new season of Straight Up Steve Austin below.

What do you think? Are you a fan of Straight Up Steve Austin? Do you plan to watch the new season on USA Network?