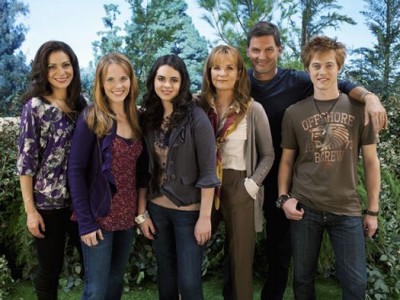 TV show description:
This dramatic TV series tells the story of two teenage girls who discover that they were accidentally switched as newborns in the hospital. As a result, they are raised in very different environments than what they would have been.

An artistic teenager, Bay Kennish (Vanessa Marano) grew up in a wealthy family with two parents and a brother. Privileged and eccentric, she’s lived a charmed life with the family she thought was her own. She was raised by her stay-at-home mom Kathryn (Lea Thompson) and former professional baseball player father John (D. W. Moffett), in the wealthy neighborhood Mission Hills, Kansas, along with her brother Toby (Lucas Grabeel).

After studying blood types in school, Bay begins to wonder why her blood type does not match her parents’. The family has some genetic tests done and discover that Bay is not biologically related to them. They discover that the hospital mistakenly switched her with another female newborn, Daphne Vasquez (Katie Leclerc).

She’s a deaf teen living with her struggling single mother Regina (Constance Marie) and Puerto Rican grandmother (Ivonne Coll) in a working-class neighborhood in Riverside, Missouri. A case of meningitis caused Daphne to lose her hearing as a child so she attends Carlton, a school for the Deaf, where she plays basketball and learns sign language.

Emmett (Sean Berdy) is Daphne’s sweet but protective best friend. Also deaf, he has a passion for photography and can be often found taking pictures or riding his motorcycle. His mother Melody (Marlee Matlin), is best friends with Daphne’s mom, Regina.

Things come to a dramatic head when the families meet and struggle to learn how to live together for the sake of the girls.

Series Finale:
Episode 103 — Long Live Love
Kathryn becomes nostalgic when she realizes that it’s been five years since the switch was discovered and the two families started living together. As she searches for memories, Kathryn discovers a long buried family secret – stretching all the way back to the switch – that changes everything. Daphne competes against Mingo for a six-week paid internship in sports medicine. Bay is celebrated for her tattoo work in a magazine spread, but her struggle to prove herself as an artist to John threatens to destroy their relationship. Toby meets Amelia (guest star Lauren Potter), a young woman with Down Syndrome who changes his perception about his son’s future. Melody, Emmett and Travis make some major decisions about their lives, and Regina takes a chance on love. (Courtesy Freeform. The finale is 90 minutes.)
First aired: April 11, 2017.

What do you think? Are you a fan of the Switched at Birth TV show? Do you think that it should have been cancelled or renewed for a sixth season?

Switched at Birth is one of my husband’s and my favorite shows. We would really miss it if it ever got cancelled.

This is a unique, unique show. Where else on TV can you see a family struggling with a daughter’s handicap (amazing, we see deaf actors signing on TV!) while we are also in love with a teen and her sister trying to understand friendship, sexual awakening, job difficulty and family economics. Please keep this show sgoing for all of us to continue seeing our world as it really is.

When will the switch at birth be back on I love the show?

I love switched at birth!!! I hope it never gets cancelled!!!!

Is this show canceled? I really enjoyed this show, please don’t cancel!

No, it was renewed for season four in Ag or Sept.It was on its season three hiatus Midseason when you posted this

i sure hope they keep Switched at Birth going the only one of my fav shows left from ABC FAMILY CHANNEL!

I’ve really enjoyed this show. All of the actors are great,from the seasoned ones to the new ones. I hope this show will be on for along time.

I like this show it shows friendship love and how hard some people lives can be we live in a society that judges way to quick. Don’t take it off it might show some people how much other peoples lives can be!!

Watched all 30 episodes…..what happens next?

I hope this show doesn’t go off, it’s fun and such a different story than the usual shows. Please keep it on

[…] Family has renewed Switched at Birth for a second season, even before the entire first season has […]

[…] knew that Switched at Birth would be returning this fall but ABC Family has now given us an actual date. The remaining 10 […]

[…] Switched at Birth, Bay Kennish (Vanessa Marano) and Daphne Vasquez (Katie Leclerc) had quite a shock. Will their […]