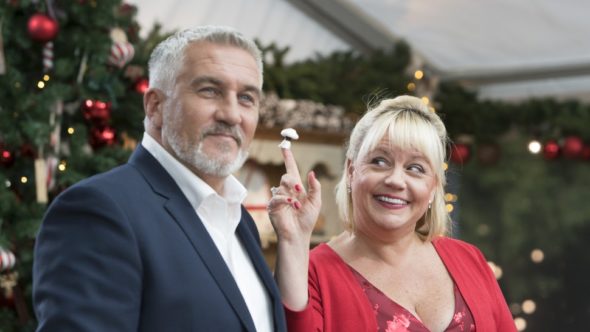 ABC is headed back to the kitchen. The network just announced they’ve renewed The Great American Baking Show for a fifth season and ordered a holiday special.

Hosted by Emma Bunton and Anthony Adams, the cooking competition show pits the country’s top amateur bakers against each other in a series of baking challenges. Paul Hollywood and Sherry Yard serve as judges.

The Great American Baking Show will return for a holiday special this December. You can read more about the renewal from ABC below:

ON YOUR MARK, GET SET, BAKE! THE COUNTDOWN IS ON TO ‘THE GREAT AMERICAN BAKING SHOW: HOLIDAY EDITION,’ RETURNING TO ABC THIS DECEMBER

A double dose of “Spice,” a dash of Sherry and a pinch of Paul is the perfect recipe for a fifth season of the most delicious show on television as “The Great American Baking Show: Holiday Edition” returns to ABC this December. It was announced today with the help of Rosie’s Dessert Spot on the show’s official Instagram page @thegreatamericanbakingshow. Click here to view announcement.

The series, which is based on the U.K hit “The Great British Baking Show,” will once again showcase bakers from around the country putting their best sweet and savory creations forward as they compete in holiday-themed challenges and eliminations all hoping to be named “America’s Best Amateur Baker.”

What do you think? Have you seen The Great American Baking Show? Will you watch the new season?

Yes. Love both the American and British version.

I will definitely be watching this show!