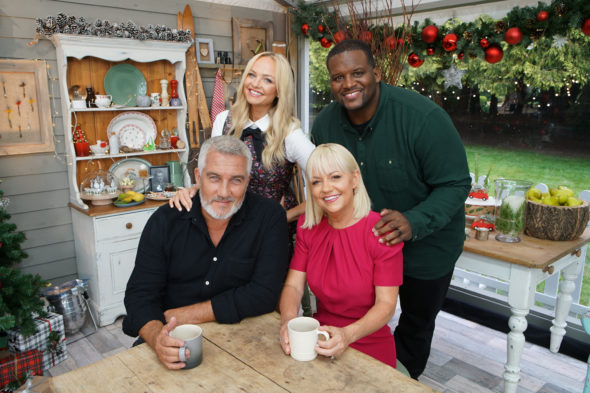 This series has become a holiday tradition on ABC — one that traditionally draws pretty low ratings. This time around, the episodes of The Great American Baking Show aren’t all airing before Christmas and the season won’t actually finish until after New Year’s. Will this schedule help or hurt the ratings? Will The Great American Baking Show be cancelled or renewed for season six? Stay tuned. Status Update Below.

An ABC reality TV show competition, The Great American Baking Show: Holiday Edition is a US adaptation of The Great British Bake Off. The series features bakers from around the country putting their best sweet and savory creations forward as they compete in holiday-themed challenges and eliminations all hoping to be named “America’s Best Amateur Baker.”The program is hosted by the Spice Girl’s Emma Bunton and former NFL veteran Anthony “Spice” Adams. Award-winning pastry chef Sherry Yard and expert baker/author Paul Hollywood return to judge the decadent and delicious treats.

1/3 update: You can see the latest night’s ratings in context.

For comparisons: Season four of The Great American Baking Show on ABC averaged a 0.68 rating in the 18-49 demographic and 3.44 million viewers.

What do you think? Do you like The Great American Baking Show TV series on ABC? Should it be cancelled or renewed for a sixth season?

6/3/22 update: The Great American Baking Show is moving to The Roku Channel.