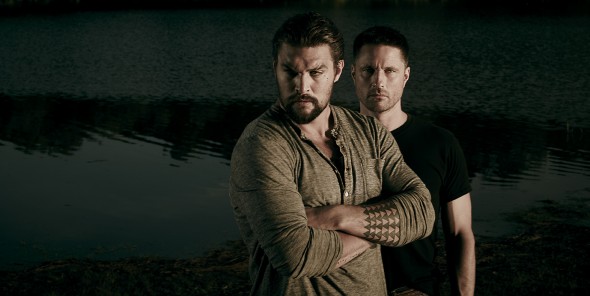 TV show description:
A missing college student in rural Walpole, New Jersey brings longstanding tensions between the Native Americans and the local townsfolk to a rolling boil. Painful past tragedies between the populations now simmer with new conflicts in the desaturated landscape.

In this town, every exchange is mired in decades of discomfort. When every action seems doomed to birth yet another disaster, no one remains above distrust for long.

Jensen’s newly sober mother Jean (Julianne Nicholson) fights her own demons that can’t allow her daughter to date a Lenape. Her husband, local police office Harold (Martin Henderson), struggles to keep the consequences of Jean’s varied psychoses under wraps while upholding the law.

Their intricate schemes to keep Harold in their pocket (or in the dark) only complicate relationships that are already strained by circumstance, history, and racial bias.

Series Finale:
Episode #12 — Shadow Walker
Harold and Phillip catch up with Junior, who tells them Levi is not far behind.

Katie picks up pills for Jean to resume treatment while Rachel stays at a friend’s house, not yet ready to see her mother.

Phillip goes ahead to distract Levi and his men while Junior and Harold stay back.

Jean visits her father, apologizing for her earlier accusations, convincing him to take her inside the house to “say goodbye.” Once inside, Jean confronts her father, who finally admits the truth about her brother and his own abusive attempts to treat Brian’s schizophrenia. Jean hooks a plastic bag over her father’s face like he used to do to Brian. He fights her off, but then suffers a heart attack. Instead of calling for help, Jean watches him die.

Harold and Junior make it to the highway and commandeer a passing truck. Junior begs Harold to wait for Phillip and he does, giving Phillip just enough time to hop into the truck bed and escape Levi’s men.

Rachel finds Jean sitting outside her childhood home and tries to take her away. Jean tells Rachel “the bag” is still inside and no one can see it. Rachel enters the house and finds her grandfather’s body as well as the plastic bag nearby.

Harold drops Phillip and Junior off at Marie’s, where they find Marie taking care of Mike’s baby; Sonya left the child when she fled. Phillip tells Marie that Levi will come after them, but they have to handle it on their own to avoid Junior going to prison for attempted murder.

Harold tries to comfort Jean and Rachel. Later, Jean asks Rachel what’s wrong, and Rachel shows her the bag. Jean confesses the truth about her father and Brian and the bag. Rachel wants to go to the police, but Jean says they don’t need to.

On the news, the Jensens learn that Jean’s father called the mayor’s office to voice his version of events, casting blame on the Lenape for polluting the mountains.

At work, Harold tries to prevent the force from promoting conflict between the people of Walpole and the Lenape.

Harold visits Marie, sharing Jack Kopus’s confession and asking her to visit Jack in prison and try to determine if he’s telling the truth.

In prison, Jack taunts Marie about her decision to leave him to join Levi’s cause and the effect it had on the young Phillip. Eventually, Jack tells Marie the truth: Walpole city officials were behind the dumping — the mob just supplied the drivers. Jack gives her the picture of a young Phillip posing with his soccer trophy, pointing out a Walpole sanitation truck in the background — evidence of the city’s complicity.

Harold pays Phillip a visit, revealing he’s pulled strings to keep Phillip out of prison despite violating his probation by traveling out of state.

Junior and Rachel reconcile and share a kiss, Junior telling Rachel he’d stay by her side if she started manifesting symptoms like her mother’s.

Marie shares the picture of the Walpole sanitation truck with Sky, asking if it will serve as compelling evidence in her planned lawsuit against the city.

Junior shows up at Phillip’s to help defend against Levi’s men. Phillip turns him away, reminding him that Mac was not the vengeful type.

The officer who responded to Rachel’s emergency call tells Harold that Rachel seemed “under duress” when she told him what happened.

Jean tells Rachel she doesn’t want her getting too close to Junior again, since it will make it hard for her to leave for college next year. Rachel tells her mother she’s not going to college, instead planning to stay in town and live with Junior. Jean tells Rachel she won’t allow it, but Rachel points out that Jean can’t tell her what to do anymore, implicitly blackmailing her over the bag.

Harold comes home and asks Rachel if anything happened he doesn’t know about, but she denies it.

Levi’s men try to kill Phillip, but he surprises them, killing one and forcing the other to call Levi inside. Phillip executes Levi and his remaining henchmen as sirens converge on the scene… and then pass by.

Phillip follows the sirens to Marie’s, where he finds Frank, Marie, and Junior all wounded by Levi’s men. Phillip cries over Marie and tells her he’s sorry. (Courtesy SundanceTV.)
First aired: May 7, 2015.

What do you think? Do you like The Red Road TV show? Do you think it should have been cancelled or renewed for a third season?

This really sucks Sundance! Why would you make a commitment to viewers, begin a series and then cancel it after we are hooked? If your going to be cheap and not want to pay actors what they are worth then don’t start a series to begin with! I will never watch another series put out by Sundance again after this complete and total let down!

Good show!!! Should have renewed!!!

I just got into The Red Road and was looking forward to season 3. It was well written and acted. Why with all the weak, terrible shows out there would this one be cancelled?!?!

It was great. It should not have been cancelled.

All the really good shows always get canceled. The red road had a great dynamic cast and well thought out writing. To end on and end like season 2 was tragic

I love that show. This should not have been cancelled

I just watched this…binged! Just to find out there is not another season?! Why would anyone do this to us fans? I’m so disappointed and annoyed by this. Another great show that gets cancelled so that dumb reality gender confused arguing dysfunctional hypocrisy can be aired? Cmon man…give us a season 3 at least that doesn’t leave it so up in the air! That’s awful Sundance…just awful.

I beg you to please do a season 3. One of the best series I’ve ever seen in my 44 years. I loved this series so much that alittle piece of my heart broke when I found out that it was cancelled. To me it was like superman if he was real, reavilling himself to me then left for good a minute later never to be seen again. Imagine how dissapointed that would make someone. I just cant believe it. The red road series was pure genius

It was a very good series, very well put together. Bring it back. Thank you

We need season 3 of Red Road!!!! You can’t just end a series like you did season 2. We, as viewers, need closure. Pay Jason Mamoa what he wants and get it done!!!!

Please make a third season. This show is so good.

what??? this was amazing and now left hanging..this is one of the best series i have seen …not right to leave it like this

We absolutely need a third season. There were too many questions at the end of season two.

I was so enthralled by the story line and the actors performances (and I don’t watch TV), and It came to an abrupt end that altered my appreciation for the good taste and intelligence of the producers and directors involved. You shouldn’t **** with people’s intrigue!

I feel this comment, lol. TV shows are such crap, especially nowadays but I just came by this one by chance… and now that it’s over, I’ve got nuthin’ left to watch, and a whole lotta closure I’ll never receive due to the cliff hanger they left

This show show come back for the 3rd + season. Excellent show. I love it. How can you just leave us hanging after only 6 episodes of the 2nd season. Pretty rotten!

I started watching The red road and was hooked. many people want to see a 3rd season. Why does it always come down to ratings and of course money. Come on somebody step on some toes and get us season 3. The dedicated viewers deserve it.