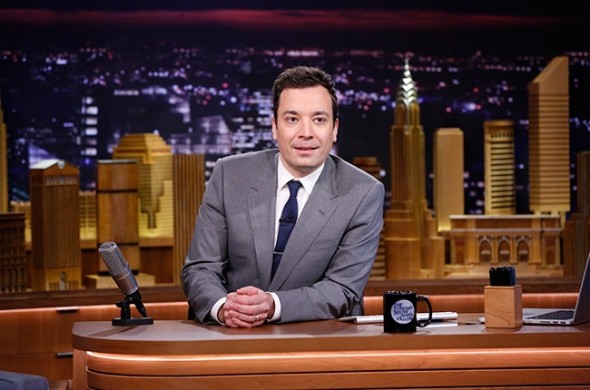 Performers include: Jimmy Fallon (host), Steve Higgins (announcer), with Questlove and The Roots.

TV show description:
Jimmy Fallon takes over from Jay Leno to host this institution of late night television, bringing it back to its New York City roots after being based in Los Angeles for more than 40 years.

In addition to a nightly opening monolgue, performances by musical guests and celebrity interviews, this program features miscellaneous skits, games, and taped comedy bits (not unlike those that were part of Late Night with Jimmy Fallon).

What do you think? Do you like The Tonight Show Starring Jimmy Fallon TV series? Do you think it should be cancelled or renewed for another season?

Tonight Show starring Jimmy Fallon is my late night go to show. PLEASE don’t cancel it. After watching all the bad news we need Jimmy to “lighten” our hearts.

RC I love the Jimmy Fallon show do not
cancel it

Have they finally cancelled the Jimmy Fallon Show? It’s long over due. There was nothing funny about the show anymore. Surprised people would actually pay to sit in the audience.

Jimmy Fallon is a take off from SNL repeat after repeat.Same ole same ole boring crap.Same people all the time.
He’s a acholholic and has hurt himself so much by being so drunk most of the time .Shame to say it but he is such a loser

Absolutely, it should be cancelled. It’s extremely boring, and definitely not entertaining!!! Fallon, seems to stumple over his words, as though he forgets what he’s going to say. He’s just not at all funny. Viewers, understand he may not lime President Trump. However, supporters don’t want to watch a show that “thrives” on Trump, jokes. Put him to bed.

the band sux big time, couldnt even get the riff of DEVO right

Jimmy Fallon is a disgrace to the Tonight Show. Jonnie Carson was pure class, Jimmy is a buffoon. They need to get rid of him and bring someone on that has class and who behaves like an adult not like a juvenile delinquent…

It’s the best late night show ever do not cancel it please that would be stupid!

We always look forward to every new episode with Jimmy Fallon. We stopped watching after Johnny Carson left but now we are back every night. We are looking forward to go to NYC to see the show live. Comedic Canadians love Fallon

I started watching the show but after all the repeats when he came back from his accident the show changed some funny but stupid….we now watch Cobert

Only option is to DVR it and speed thru the monologue and other crap!

Whose ass is he kissin’… is my ongoing question?

To put this yes man/child on late nite TV baffles the hell outa me!

Please hire an adult to entertain an adult audience! Bringing back Jay would be my 1 st wish… if that’s not possible I haven’t a clue. (just NOT Conan… just as immature) nor any of those other boring snoozers with late-nite talk shows!

Only reason Fallon has anyone watching is ’cause we’re still in disbelief! (with no opitons)

I love the Tonight Show and Jimmy Fallon! It is the best way to end my day

Not as entertaining with Fallon, get rid of the announcer and quit playing to him, stop acting like a teenager and entertain the audience. Act like an adult and rip liberals as well as conservatives! The show may go the way of Conan!

We love Jimmy —- Congrats to him and we loved the first show. Can’t wait for tonight and my favorite female singer ——–Lady Gaga. I hope he sings with her. They are great together. Go Jimmy!!!