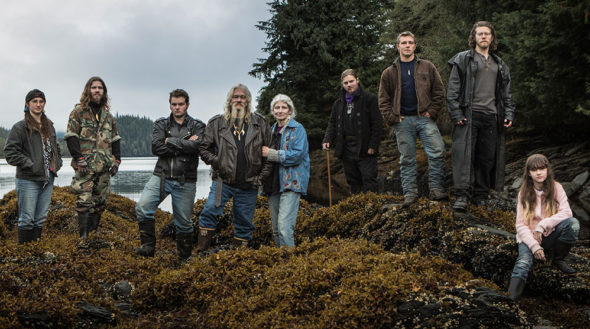 Discovery is returning to the icy north. Recently, the network announced season nine of Alaskan Bush People will premiere in March.

The docuseries follows the Browns, a family trying to survive and establish a homestead in the Alaskan wilderness. The new season will see the family “re-dedicate themselves to the life they love off-grid in the wild mountains of the pacific northwest.”

(Los Angeles) – After making their long-awaited return to the wild last year, the Brown family is back for a brand-new adventure-filled season of Discovery Channel’s top-rated series, ALASKAN BUSH PEOPLE. With their first foothold of self-sufficiency realized with the construction of their barn last season, the Browns re-dedicate themselves to the life they love off-grid in the wild mountains of the pacific northwest. They’re closer than ever to realizing their lifelong family dream of a sustainable ranch but must overcome new challenges and incredible family changes as a brutal winter hits earlier than expected. ALASKAN BUSH PEOPLE returns Sunday, March 3 at 10PM ET/PT on Discovery Channel.

It’s a race against mother nature’s clock as the wolfpack attempts to build a winterized cabin, hunt, and stockpile food ahead of a harsh winter. Last year’s record snowfall made it clear that the Brown’s temporary shelter will not withstand their first full winter on the mountain, placing more pressure than ever on the family’s need to complete necessary infrastructure, including a suitable shelter before the mountain freezes.

This season also brings extraordinary changes for the Brown family.  Billy, the Brown family patriarch, has an expansive new vision for the family’s homestead, including new livestock, and a 2000lb bull.  Ami continues her incredible recovery in her fight against cancer and passes on her bush knowledge to the wolfpack. Bird spearheads hunts, and steps further into her role as a leader. Bam, the second-born son and the family’s voice of reason, has his hands full with new builds for the ranch. Bear continues to immerse himself in the wild, while Gabe puts his new-found love life front and center. As youngest daughter Rain approaches adulthood, she faces high expectations and potential failure, against the tradition of Brown family rites of passage.

The biggest change of all comes as Noah, the family inventor, and his new wife Rhain-Alisha get news that they are expecting the first grandchild of the wolfpack. Noah races to build the perfect bush home on the ranch for his growing family.

Throughout the season, the Brown clan is pushed to their limits as they overcome new obstacles in their quest to rebuild their natural home in the wilderness.

What do you think? Are you a fan of Alaskan Bush People? Will you watch the new season?

I like all the Alaska shows , but can’t watch now cause it’s got all the keys to pay for. That is really dumb.

Looking forward to the Alaskan Bush people series every season. Love all the new projects they complete.
Would like to see Ami get a shorter hair cut, her hair looks like a wig. She is to cute for that long hair.
When is Bird going to find romance?
Rain is becoming quite a lovely young lady, like how she handles Bam Bam temperament. Still miss Matt in the series. Will he return this coming season?

I love the show wish I could get more of it. I would love to visit the family. Would love to b friends. I’m all abou

Waiting and hoping to share in life, they show everyone everything that is important. I one day I can move to my own and live peaceful with nature.

We are very disappointed not to see additional episodes of The Alaskan Bush People. My daughter and I were watching on Sunday nights together and looking forward to the next episode on Discovery.
Has it been cancelled?

My husband and I have been watching the new season nine of Alaskan Bush people that all of a sudden it’s not on Sunday nights anymore did they cancel the show?

My husband & i haven’t missed a episode
Of Alaskan Bush people. Did they suddenly cancel the show ? We started watching season 9 and all of a sudden
It’s NOT ON

Yes, I will watch more seasons.

I love the show.Glad to see Amy well and the kids growing up getting married and having there on babies. Keep it going.

I have followed this family since the show aired. What a great opportunity to offer others who want to be”homesteaders” a learning experience with this family. This could also help with building the Brown town location. At any rate, I feel this family has been very resourceful with the engineering of the many mechanical ideas re-purposing what others may call junk. I hope this program doesn’t end. Would it be possible to have a few” lay ” people live with the Browns for a while as an internship? There are people like myself willing to work hard and learn skills… Read more »