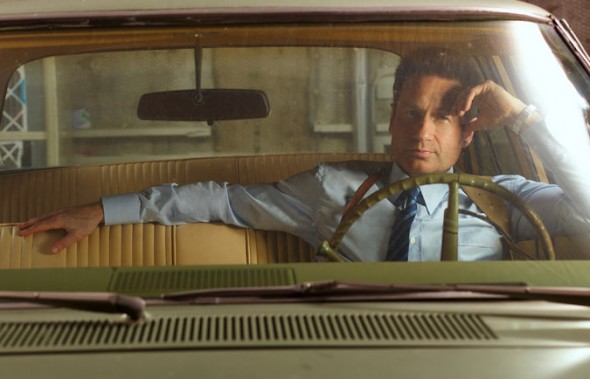 Though the traditional ratings for Aquarius have been anything but stellar, NBC Entertainment Chairman Robert Greenblatt doesn’t regret renewing the drama for a second season.

At the Television Critics Association press tour, he said, “I’m never going to apologize for renewing a show I think is creatively strong for a second season.”

Greenblatt thinks the decision to release the whole season online was a good one. He noted, “We’re obviously in a changing world. We’re looking every day for what are the ways that we can really respond to the way that the audience wants to watch television. We all know that the binge-watching is a thing and people demand it. And so we thought, well, maybe we could do that with this show and see what happens. The upside of what happened is that people automatically thought better of the network. We did some early research and people were more favorably disposed to NBC for having a show that could be binged than they otherwise would be.”

He said that, surprisingly, only 6% of the show’s audience came from online viewing. The vast majority of people watched the series via traditional means.

Greenblatt was doubtful however that the second season would be released online all at once — in part because the season won’t be finished in time.

What do you think? Did you binge-watch Aquarius? Do you think that it should have been renewed for a second season?

yes! I love this show and cannot wait for the new season!L

Yes we binged watched it twice! I by myself 1st then with others after telling them how good it was and we all LOVED the concept of the whole season at once! Made for 2 wonderful weekends!

I didn’t binge watch this show, primarily because I wasn’t aware of it. I love the show so had I known I likely would have binged on it. I’m glad you’ve renewed it because it’s a show where you want to see the next episode as soon as the one you’re watching is over.

We are children of the 60’s and 70’s and love this show. Love the retro music, the politics and DD. It is somewhat similar to Mad Men and with a little more put into it – it could be just as good! I agree it’s gritty and that’s what makes it real.

There is off the hook great!!!!!!!! Direction, acting and story line is top notch. Please continue.

However I do have one big big problem. We you please please please stop advertising during the show. It is such an insult to the creative talent to advertise on its canvas. How can we get the true essence of the show when NBC is constantly taking our attention away. At one point on the season finale advertising for the Carmicheal show never left the screen.

Season 1 is on Netflix. Someone could watch it all in one day. 13 hours with NO commercials.

@ Star – thanks for some really good comments (just below), you cover many of the areas that I was going to include so I’ll just refer people to your very well written comment e4xcept to emphasize some of the aspects that I find most important. I did enjoy the series even though I often felt that it was dragging along slowly. However, even with that fault, I still found it very worthwhile, not only for the history, but to encourage a real comparison of where our society has taken us. I was a teenager when the murders were committed… Read more »

I like this series not just for DD, but because it is a period piece series- much like MadMen and I think for those who were around in that era or a kid or just into history it shows you the trials and tribulations of those times depicted in the late 60’s- even if it is happening in LA. It is also multifaceted- there are subplots brewing and I am sure next season they will be able to develop on them and add new characters and storylines. It is not( like some people assume) all about Charles Manson- which when… Read more »

Whoops! I meant to say as far as Charles Manson- his character and his part in the storyline of Aquarius- some people think it is about the murders and this series is situated in time approx 2 yrs before the murders even take place. While no one actually likes Charles Manson( unless they are demented!) his character is played well here and you can’t help wonder what makes this weird dude tick. Because at the point in time the series is unfolding, he is , for the most part, a really weird dude with a rap record. I sit in… Read more »

DD is a great actor but this was one of the most boring shows over the season. I tried giving it multiple chances but the story was just so weak.

I love the show and am so glad it will continue.

I ADORE David Duchovny and have never disliked his work..until Aquarius. Nevertheless, I was certain I could stick it out and watch Aquarius until the series ended. Surely, it’d be cancelled…It was an awful show…storyline jumped the shark each week. I must give David props for giving it his all…but I could not stick it out…stopped watching with three more episodes to go. Am surprised it has been renewed. Don’t understand the cancelling of so many programs with good writing and storylines and this one being renewed.

And yet the cancelled Hannibal, one of the most creative shows on right now.

This is an excellent show. Please watch it.

Great crime drama very gritty and grat retro music! Cast is also amazing but That is what we would come to expect from the great David Ducovny and his new comer partner in the series Grey Damon.

Well, we tried Aquarius just could not get into it . I sure wish Mr Greenblatt would stick up for Forever and give it a second chance and season is sure deserved ir!!!

Forever was on ABC not NBC so Mr. Greenblatt had nothing to do with that one.
And the online community tried very hard with over 100k s”signatures” to save Forever…didn’t help 🙁