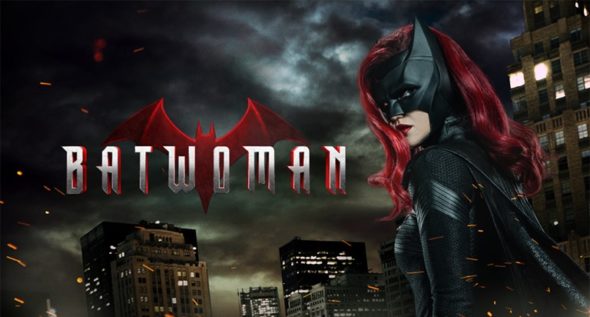 Will this new caped crusader prevail? Has the Batwoman TV show been cancelled or renewed for a second season on The CW? The television vulture is watching all the latest cancellation and renewal news, so this page is the place to track the status of Batwoman, season two. Bookmark it, or subscribe for the latest updates. Remember, the television vulture is watching your shows. Are you?

Airing on The CW television network, Batwoman stars Ruby Rose, Meagan Tandy, Camrus Johnson, Nicole Kang, Rachel Skarsten, Dougray Scott, and Elizabeth Anweis. The show is based on the DC Comics character and revolves around Kate Kane (Rose), a strong woman who never planned to be Gotham’s new vigilante. After a dishonorable discharge from military school and years of brutal survival training, Kate returns home to Gotham City when the Alice in Wonderland gang targets her father, Jacob Kane (Scott), and his security firm. They kidnap his best Crow officer, Kate’s ex-girlfriend Sophie Moore (Tandy). In order to help her family and her city, she becomes the thing that her father loathes the most — a vigilante. With the help of her compassionate stepsister, Mary (Kang), and crafty Luke Fox (Johnson), Kate continues the legacy of her missing cousin, Bruce Wayne (aka Batman), as Batwoman.

The first season of Batwoman averaged a 0.26 rating in the 18-49 demographic and 995,000 viewers. Find out how Batwoman stacks up against other The CW TV shows.

Will The CW cancel or renew Batwoman for season two? The network depends on traditional ratings less than the other channels. Since Batwoman is linked to the other superhero shows on the channel and has ties to Batman, I think the series will be renewed, regardless of the numbers.  I’ll still keep an eye on the ratings though and will update this page with breaking developments. Subscribe for free alerts on Batwoman cancellation or renewal news.

1/7/20 update: The CW has renewed Batwoman for a second season.

What do you think? Are you glad that the Batwoman TV show has been renewed for a second season? How would you feel if The CW had cancelled this TV series, instead?

I thought the first few episodes were some what good. Afterwards…What happened? The show got cheesier and dumber than the dumb and dumber sequels!

I can’t believe it they save the DVD hope alive. With the Alice and her brother being realted to batwoman and by extension Batman. By using the other earths. There by making the DVD sale once $6.or ten dollars meet In the middle at 8. Good job holding on to it I hope season one make an DVD.

Nobody likes agendas just get rid of it

Batwoman is garbage. Cancel it.

it’s getting a Season 2!

Do not cancel it but renew it and make improvements

They can not make improvements the original comic kind of sucks. It was originally a joke character in The Golden Age it always sucked. Bike might as well do a Ambush Bug comic book TV show. Exactly why they going to do change the actress the concept the director the writer the cast. Nobody has a problem with lesbians a female superheroes. we have a problem with woke nonsense. Social signaling and ********.

She was not a Lesbian in the original comics and Commissioner James Gordons daughter Barbara!

Please stop the show it has no sence at al ,no clever plots and no good storyline.
Batgirl is to OP and to many agenda in it unfortunaly.
The Comics made more sence than this pease of garbage,and even that is a joke.

I love this show.Please don’t cancel it .Give it a chance .

Its had a chance and its still going no where!

That Wig is terrible and Ruby doesn’t have a presence. Dump it, but because of other PC factors, I don’t think they will. Also, the Crisis episode with an evil Batman was a loser.

I dont read comic books and I dont know the background stories to any of the DC comics actually. I’ve never watched any of them but I started watching Batwoman and I really like it. I know some true fans are disappointed in things about the show and I respect that aspect but I really am enjoying it, I really hope they give it a chance and at least give it a second season to see how it plays out and where they take the storyline. I think each episode has gotten better and better. First show in awhile I’m… Read more »

I watched the first three episodes, hoping it would improve. It didn’t. I gave up.

I thought I was being to hard on it so I checked reviews rotten Totten tomatoes give it the highest 69%.(D+) IGN with 63%(D)lastly metacritic with 60%.(D-) so agv an 66(D+) so I was being to hard on it I thought it was an 54.86% (F). But I guess I still not watch more but if I hear it improves. I just might catch up on it when board silly. if ondamand has it listed for free.

not sure where are you getting your numbers..
Rotten Tomatoes has give it a 73%
https://www.rottentomatoes.com/tv/batwoman/s01
IGN 8.2 out of 10% (they don’t do %)
https://www.ign.com/tv/batwoman
And you only got Metacritic right at 60% and that number probably would be higher if they had added all the reviews like RT did.

not sure where are you getting your numbers..
Rotten Tomatoes has give it a 73%
https://www.rottentomatoes.com/tv/batwoman/s01
IGN 8.2 out of 10 (they don’t do %)
https://www.ign.com/tv/batwoman
And you only got Metacritic right at 60% and that number probably would be higher if they had added all the reviews like RT did.

I think I can explain myself a bit. For IGN I took what it said was average at the time witch was 6.3/10 so I said 63%. Since if you take turn that into a percentage it’s 63%. I do see how it could look odd if you know that not how they do it. And I took it from the date posted October 15 5days after episode 6. You commented December 9 8 days after episode 8. I think what happened was it got higher reviewing and more people going on leaving reviews since than. I honestly believe I… Read more »

Didn’t care for it. Lots of really good shows are cancelled this one isn’t good, it’s got to go.

fans are hyping on it because fans want a batMAN series not batwoman plus the blood red hair looks like a bad wig, yea this is dead on arrival i dont mean anything on the woman part its fact that people love batman and if it isnt barbara we could care less hell ill take cassandra over kate they were stupid to pick kate most fans, except for hardcore ones, only know of barbara gordon as batgirl/batwoman when older. come on dont they know it be awesome to watch barbara get shot by this new joker becoming oracle live action… Read more »

im a fan.. I want a bat woman show not a bat man show… I have been a fan of comic book Kate for years….I respect your personal opinion… but that is all it is… stop assuming everyone thinks like you.

Yeah but girl would have been good!