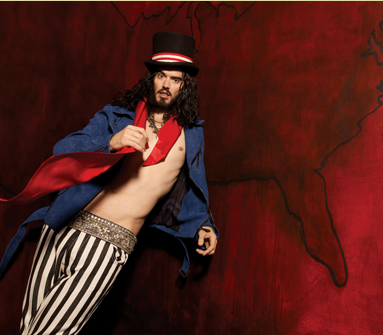 He takes on the news of the day, using his unconventional sensibility, spirituality, humor and status as a recently transplanted Englishman to get to the bottom of what the news really means. The show is driven by Brand’s interaction with a live audience as he discusses pundits, news makers and activists (many of whom he calls his friends).

What do you think? Do you like the BrandX with Russell Brand series? Are you sorry that it won’t be back for a third season?

Cancelled because the revolution will not be televised! Russell Brand was awake and very wise. I now only view Big Bang Theory repeats on my cable television set. Brand X Live # will undoubtedly have some “reality” show plugged in its place. Thank you western civilization and the illusion of choice!

Another season of this brain dead liberal moron saying ironic things ironically. Great.
“Scary smart”? What are you, 5 years old?

I love the show. Up there with the Colbert Report for intelligence, humor, and ‘the real’ news. Keep i on!

Love this show. I like kambau too but I miss brand x on Thursdays when will there be more episodes?!?!

I like the show, I like his style. When will people stop breathing down his back it is a NEW SHOW ANY NEW show takes some time to gain it’s momentum and especially with someone as genuine as Russell Brand. I have seen several other late night show hosts that did not start out that strong and now are holding their own. And not everyone really gets his humor or way, but his fans find him very entertaining and thought provoking. I think the show will do well if not it is a sad example of the mentality of all… Read more »

The show sucks a whole lot of ass

Saw the first two episodes and didnt return for a third.

[…] FX’s BrandX with Russell Brand, the comic offers his own peculiar take on the news events of the day. Will it bring big ratings […]