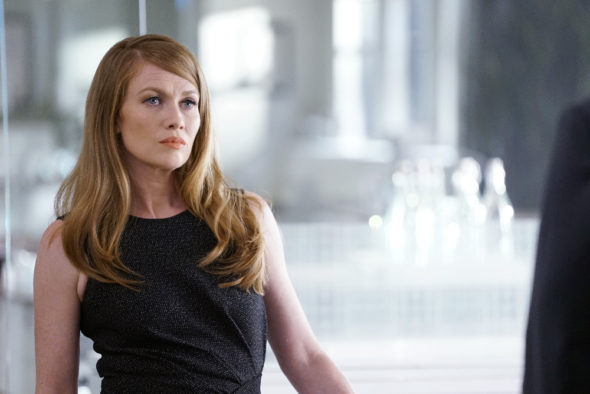 It looks like The Catch has failed to catch on. The ABC TV series has been cancelled after two seasons. The defacto series finale airs tonight.

Unlike Shonda Rhimes’ series that have also aired on Thursday nights, The Catch has never pulled in strong ratings. Even after extensive retooling as a romantic comedy, season two has been averaging a poor 0.68 rating in the 18-49 demo and only 3.32 million viewers, making it one of ABC‘s lowest-rated series for the 2016-2017 season.

Produced by Shonda Rhimes and Betsy Beers, The Catch was supposedly a favorite of ABC boss Channing Dungey. Unfortunately, that wasn’t enough to land the low-rated series a third season.

What do you think? Are you a fan of The Catch? Do you think ABC should’ve renewed the series for a third season?

This is why I’m always skeptical in watching an ABC show, they only care about huge rating and don’t respect the couple of “millions” that watch these shows like The Catch, 666 Park Ave, The Whispers, etc., will think twice about starting a new show.

Love this show! You always take of the good ones and leave junk to watch in its place!!!!!

I m anxiously waiting for season 3 …I love the character of Rhys and Margot .

Would love to see Ben coming back to get Rhys and more backstabbing.

LIKE SERIOUSLY..people love this show and I also looooove it..please put it back on please im begging you!!!!!

PLEASE bring back The Catch!!!!! Love this show….please bring this one back!!!!

It’s an amazing show, my favorite on tv. Is so different, funny, with lot of action. I love the cast and the stories, the chemistry between Ben and Alice and Rhys is so funny. Please bring back The Catch Pleaseeee!!

The show is exciting & action packed! Always looked forward to watching it. Please consider giving a 3rd season. The way season 2 ends, is like a cliff-hanger & I’d love to see what else would happen.

Please renew this show, it is one of the best on TV. I recorded all of them so that I can go back and watch again – please, PLEASE, PLEASE RENEW/!!!!!!

This show is so awesome. I don’t understand why you would cancel it. this is one of the best show I have seen in a long time. The actors are amazing, the story line unpredictable and exciting. the creators of this show are truly gifted. Please, please do not cancel this show.

I loved the show. Please run another season

I agree with KIM so please give them another season.

Who evaluates shows? This was one of my favorites. Looked forward to it every week. Watched several airings more than once. Smart dialogue, clean dialogue. So disappointed it was cancelled.

I Loved and looked forward to watching “The Catch” every week and DVR’d it every episode so I could capture every moment and buzz through too many commercials! Plus I could rewatch each episode in case I missed anything at all! I enjoyed the James Bond kinda theme….the more hot rods, mystery and suspense the better. I am REQUESTING another season PLEASE:)!! Introduce more characters, intrigue and suspense! Bring in some special guest stars! But Don’t Give Up The Ship! I think the Main Characters are AmAZinG!,,,,

What NO!!!! The catch was one of my favorite shows!!!! This happens every time I invest my time into a show! I give up Melissa