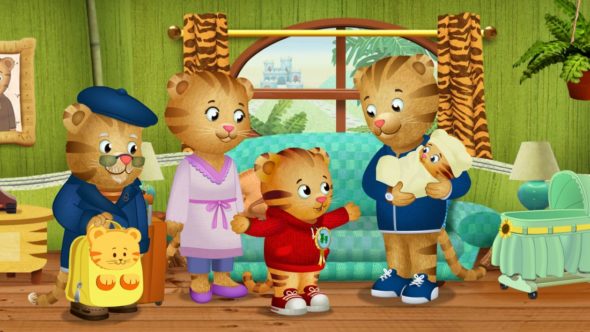 Daniel Tiger’s Neighborhood isn’t going away anytime soon. Recently, it was announced PBS Kids has renewed the TV show for a fourth season.

The animated children’s series follows the adventures of Daniel Tiger and his friends and family in the Neighborhood of Make-Believe. The show is based on the ideas and teaching of Fred Rogers.

The Fred Rogers Company has announced that a fourth season of DANIEL TIGER’S NEIGHBORHOOD, its top-rated hit for preschoolers and parents, is coming to PBS KIDS. The exciting new season, which will feature 20 engaging episodes, including a one-hour special, will also bring relatable new characters to the popular series. Season Four episodes are slated to premiere beginning in summer 2018 and will explore important preschool themes – such as being accepting of others and making new friends – through the show’s trademark catchy musical strategies.

“We are delighted to present a brand-new season of DANIEL TIGER’S NEIGHBORHOOD on PBS KIDS – and to introduce new neighbors that young fans and their families will be sure to love,” said Paul Siefken, President and CEO, The Fred Rogers Company. “Our mission has always been to help children navigate everyday challenges with their parents and caregivers, and Season 4 will introduce even more of the gentle life lessons and messages that help make the show so popular and effective with viewers.”

“We’re thrilled to welcome a new season of fan-favorite, DANIEL TIGER’S NEIGHBORHOOD, to PBS KIDS,” said Linda Simensky, Vice President, Children’s Programming, PBS. “We know children have loved growing with Daniel, and we’re excited to continue building on the important social-emotional learning that research has shown time and again is the foundation for success in school and life.”

DANIEL TIGER’S NEIGHBORHOOD was created by some of today’s preeminent innovators of quality children’s media. Creator Angela Santomero, from lead production partner Out of the Blue Enterprises, is co-executive producer, along with Kevin Morrison of The Fred Rogers Company and Vince Commisso of the award-winning animation studio, 9 Story Media Group. The animated series has garnered numerous prestigious awards, including a 2016 Daytime Emmy nomination for Outstanding Writing in a Preschool Animated Program, a 2016 Television Critics’ Association Award for Outstanding Achievement in Youth Programming, three consecutive Parents’ Choice Gold Awards from 2015 – 2017, and a 2014 Prix Jeunesse International Selection.

As of August 2017, Daniel Tiger’s Neighborhood was the #1 PBS KIDS program for Kids 2-5, Kids 2-8, and with moms of young children*. In addition, it continues to be one of the most streamed shows, averaging over 40 million streams per month**. More than 4.5 million Daniel Tiger books have been published to date, and downloads of the apps, music, and episodes continue to rank high on iTunes.

What do you think? Do your kids watch Daniel Tiger’s Neighborhood? Are you glad it’s been renewed?