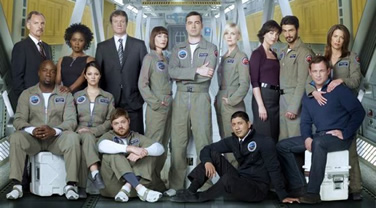 Years ago, Maddux Donner (Ron Livingston) and Ted Shaw (Malik Yoba) were once part of a mission to Mars. When a storm prevented their teammates from returning in time for the mission’s space module to be able to return home, Mission Commander Mike Goss (Andrew Airlie) on Earth gave the order to leave without them. Donner reluctantly agreed and sentenced the others to death on the Mars surface.

A decade later, Donner and Shaw are alternates on the Antares mission, a six-year journey to the other seven planets in the solar system. They get a second shot after the mission’s commander, Rollie Crane (Ty Olsson), and flight engineer, Ajay Sharma (Zahf Paroo), mysteriously develop heart murmurs and must be sent home. Neither is happy about the development. Rollie begrudgingly leaves behind his wife Jen (Christina Cox), a biologist who was once romantically involved with Shaw. Meanwhile, Ajay has a nervous breakdown and ruins his future prospects as an astronaut.

Despite their good fortune, things aren’t all rosey for Donner and Shaw. Donner has visions of his former girlfriend, ship’s geologist Zoe Barnes (Laura Harris), falling naked out of an airlock. Shaw learns from his wife, Mission Control scientist Eve (Karen LeBlanc), that there’s a lot more to this mission than they know.

Every aspect of the eight astronauts’ lives on the ship are being monitored and scrutinized back home by Goss and flight surgeon Claire Dereux (Maxim Roy). He’s leading the mysterious agenda and she stumbles upon the truth about the mission.

Flashbacks to the astronauts’ training days help to fill in their backgrounds and motivations. As the crew gets further and further into their mission, it becomes apparent to all of them that the mission is not what it seems. A series of strange events leaves them struggling to survive while the people of Earth watch their every move.

That is “When movie sequels are coming back 20 years after the original movie, why not bring back a TV series that was really though provoking. Scifi at its best. Todays CGI is better equipped for the needs of a show like this one. Besides I have watched this series at least ten times over the years and still want some answers.

Scifi is really in right now, so, lets bring this back now. We movie sequels coming back 20 years after the oroginal, why not a TV show that was really thought provoking.

For those who have no brains ie those who cancelled the show should go back to the hospital and have the lobotomy redone, the show was worthy carrying on, a bit far fetched but then so is life, its not often we get good sci fi, deep space nine, star trek Babylon 5, this series was in line for joining them if let run, bring it back please

I just caught the 13 shows on DVD. Dear God, ABC are idiots. This is the best Sci-Fi series since Fire Fly. Oh, yeah, they killed that on FOX too. Well, I’m old enough to remember the day NBC cancelled Star Trek. Now there was another smooth move by a network, which they live to regret for decades.