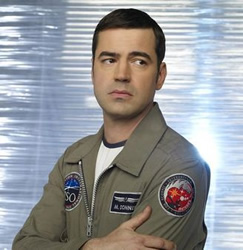 This was a great series and should have been sold to the Sy Fy Channel in the first place. It was only offered to Sy Fy after two episodes had aired on ABC. Sy Fy didn’t want it because it wouldn’t have been their show. They did however, steal a lot of this show to put into Stargate Universe, which only lasted 2 seasons and was the absolute worst show ever. The thing that killed Defying Gravity was being associated with ABC.

It has been 3 years and I still think about this show. I managed to watch the unaired episodes online. I just really can’t get over that they cancelled this show, it had so much potential. I guess the reason I still think about it is because there is still nothing out there that is anything like it. As the last commenter said (over a year ago) – What a shame.

What are ABC execs, half-wits? Intellegent writing that avoids cliches as DG did takes time to develop rounded characters because like all good writing, the writers are not just throwing cardboard, two dimentional caricatures at you. And likewise in order to develop an interesting and organic storyline, there has to be subtilty and mystery. Everything can’t be immediately explained with the audience being led by the hand and everything revealed at the end of every hour. This show deserved to be continued. Let’s hope that cable picks it up, although by now that is unlikely; I did read somewhere that… Read more »

Having seen the 5 missing episodes I hope some other network picks up the show. It was slow to build but started to work itself out about episope 8. It is a story worth watching.

Excellent show, excellent story line, excellent characters. Just found the series on Netflix and love it and want more. Some station needs to pick this up and continue the story. Do we really need another cop or medical series, or one that just goes off on tangents (Heroes, Lost, Event, and Sanctuary). I found this to be a thought provoking show with great people and a good story line. I want more. This should show that whoever was in charge of getting the show out there did not do their job.

Why the hell did they cancel DG. This show was a very good and interesting show.This show is atleast not a crappy show that has no beginning middle and end. This is a story line to follow and that is understandable and has good struckture.I really think they must bring back DG !!!!!!!!!!!!!!!!!!!!!!!!!

oh come on, l hate waiting till 10:00 when my show comes on and their nothing on till then. and l also hate when you get in to a show can’t wait to find out what happens next and it’s cancell this is one of those shows. their is never anything on saturday let’s get with it not everybody goes out that night. please bring it back.

I really liked this show and all the actors were great espically laura and Ron were my favourites.
I wish that the network would give it a little more of a chance. There is a lot of crap on tv and they go ahead and cancel a great show. What’s up with that.

I agree. I’m getting really tired of these really cool, really smart shows getting canceled before their time. Firefly, Journey Man and now Defying Gravity! Everytime I start enjoying a clever show, a real human drama the damn network cancels it. Please bring Defying Gravity back!

Defying gravity needs to return. I just saw the last 5 episodes on DVD and they were INCREDIBLE! This show is well written, with great acting and interesting characters. Please bring it back.

Oh, and Defying Gravity (which I’ve already voted to keep) needs to come back. You just cannot leave me hanging on this one. It’s one of the best of its kind that has aired lately and deserves a chance to gain momentum and develop a base following.

I liked the show. The time slot was bad for me, thank heaven for the DVR. I would like to see if it picks up over the summer. Maybe the network will too, does not sound like they have too much going this year anyway.

How unfortunate that we can continue to be fed the over abundance of reality slop on the networks when something with a bit of intelligence behind it can barely be mentioned in promos and die a quick death in a terrible time slot. It seems that anytime a decent story tries to to be told it is shut down faster that one of the worlds worst drivers can hit a barricade. In the 80’s and 90’s there was an excuse, the najority of the decisions makers at each network had cocaine riddled brains. But what is the excuse now for… Read more »