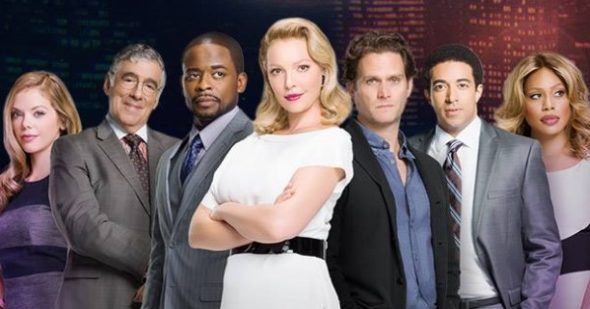 TV show description:
A legal drama, the Doubt TV show follows Sadie Ellis (Katherine Heigl), a brilliant attorney at a boutique firm. Conflict arises when she starts to fall for her charismatic client.

She must hide her growing feelings for Billy from everyone. Chief among them is close friend and colleague, Albert Cobb (Dulé Hill). Albert thinks he knows everything about Sadie, but that’s not the case.

Also working at the practice is Cameron Wirth (Laverne Cox). A transgender Ivy League grad, Cameron fights so passionately for her clients because she has experienced injustice first hand.

There is also Tiffany Simon (Dreama Walker), a second-year associate who is quickly learning the ropes from Wirth, as well as Nick Brady (Kobi Libii), a former felon who earned his degree while serving time.

The entire staff feels privileged to work for Isaiah Roth (Elliott Gould). The boss is not only a revered legal lion, but also a “lefty” legend. Roth’s approval is their highest goal.

Getting involved with her client could put Sadie’s career and happiness at risk — particularly if Billy is found guilty. She must work all the harder to prove reasonable doubt, even while she has some doubts of her own.

Series Finale:
Episode #13 — The Return
After the jury delivers their verdict in Billy’s trial, Sadie learns he has a secret that might have impacted his case. Also, Billy uses a favor owed to his family by the governor and gets Carolyn released from prison, and Nick is charged with the murder and Isaiah and the firm rally around him to get him released.
First aired: August 12, 2017.

What do you think? Do you like the Doubt TV show? Do you think it should have been cancelled? Would you have watched season two?

Great show. Please bring it back.

I’m so bummed! Just finished it & was looking forward to more

I Loved this drama!!! Excellent and talented actors!! I am totally disappointed that it has been cancelled. I hope the network will reconsider!!

We really enjoyed Doubt and all of the charactes/actors were great on the show. Why do they cancel the good shows??

I was a big fan of this show. Can’t believe it’s cancelled. So much garbage on TV, why can’t they keep the intelligent and well written ones on?

I agree with the previous viewers. Maybe the show was on the wrong night but I enjoyed it very much and was truly disappointed that it will no longer be on.

Why is this show cancelled? I’m dying to see what comes next & there won’t be a next. 🙁 Please bring back Doubt season 2.

Just finish watching all the re-runs of this great drama series. I just don’t understand why all the good shows are cancelled and we are stuck with so many comedy’s n reality shows in which I DO NOT WATCH, Why are all the drama shows taken off on all major TV stations. Please Bring it back. The re-runs was on Saturday night and it was GREAT because Friday and Saturday this grandfather has nothing to watch. If ratings are based on younger individuals than what about the older people whom their only means of entertainment is TV.

I just finished watching Doubt and was very disappointed that another good show is cancelled leaving us with no real ending. I thought the actors all clicked and enjoyed the whole season.

Loved the show and can’t believe it was cancelled! Great acting! Great stories!

Love the show! Watched the whole season 1 on amazon and would have loved season 2!

I absolutely love Doubt, I’m heartbroken about its cancellation….

CBS PlEASE LISTEN there are people out there who likes DOUBT. If you are cancelling it on your network then please find another network that will run the series. ( NETFLIX -TNT -USA – FOX – ECT.

Enjoyed the show and watched it. Should be renewed, It had some really great actors in it and would like to see how these characters develop. please renew!

Love Love this show! Actors live in the real world and the humor is real!! All of the actors play a major roll and that’s what makes it so good I love all of them!! They all bring something different to the table!! Can’t wait for season 2