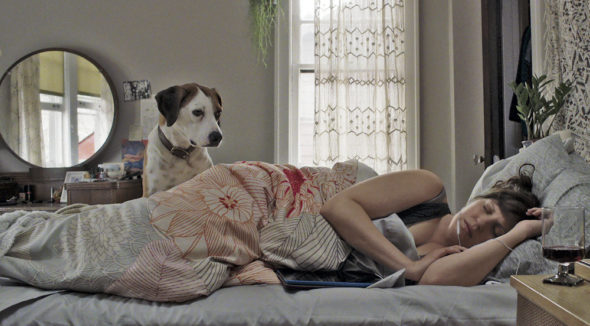 ABC just cancelled freshman comedy Imaginary Mary, while it renewed Speechless and American Housewife for a second season each. How will its new Downward Dog TV show fare? Will this sitcom prove to be the Alphabet Network’s best friend, or go straight to the dogs? Cancelled or renewed for season two? Stay tuned.

What do you think? Do you like the Downward Dog TV series on ABC? Should it have been cancelled or renewed for a second season on ABC?

I loved the show and I’m heartbroken that it has been cancelled. I hope it can be brought back♡

This is really too bad. I really liked the show. Not many shows I do want to watch, can’t stand reality shows.

I like binge watching TV shows. I assumed that there were going to be at least 13 episodes of DOWNWARD DOG and just realized that I missed the 6th episode, which will end tomorrow on Xfinity’s On Demand. So far I am really enjoying watching DOWNWARD DOG. I think it is a clever idea to tell a story from a pets point of view, especially a dog because they are so loyal and forgiving. With so many great TV shows on network and cable TV, I think that it’s important to truly give shows a chance. I know that I… Read more »

The live ratings for the last 4 episodes haven’t been good for a network TV show. ABC could have waited until it was finished before making a decision. Was there a reason to be in a hurry? Anyway, it has been cancelled. Last Man Standing had much better ratings and was cancelled.

Perhaps it was too smart and funny for the average (reality show loving) viewer to appreciate.

oh man! I have been telling everybody to watch this show . PLEASE don’t cancel it!! It is very clever and REAL. These days we need this kind of entertainment to get our minds off stuff. Please? Love the characters, the writing, love it all!!

My family loves Downward Dog. If you’re an true animal lover, you’ll love it too.

My husband and I vehemently disagree. You need to watch more episodes and give it a chance. If you don’t like it after you’ve given it a chance…then there’s something wrong with you

Exactly what my husband and I believe.

I love this show. It is well written and sweet. I agree that we need these types of comedies and not the stupid reality and game shows. The person that called it slow must not enjoy actually listening to dialogue.

I absolutely LOVE this show!!! I rush home from work every Tuesday night to watch it. The show makes me happy and sad at the same time. I relate to Nan and to Martin. They are perfect together! My favorite so far was was the Martin’s birthday episode.
I do hope it stays on for a second season and longer. Thank you for bringing a show with no violence that I can watch with my niece. I am also an animal lover and just think Martin is the cutest!! Pleas keep the show on.

I love this show. I hope people will find this show and realize how charming it is. Please renew and give it a chance.

Im sorry but this show is so boring. I have tried to watch but I just can not watch this show. Very slow moving.

I love this show as well, Martin the dog is voice perfectly always in a crisis, neurotic dog 🙂

I love this show. Have watched it since the beginning. Is it flashy? No. Is it controversial? No. Is it filled with blood, gore, politics, stupid celebrities doing stupid things? No, no, no! We have way too many of those already that just keep regurgitating themselves. It is sweet, lovable and funny, without scandal or shock value (I know, which usually means the death of a show these days). I thought ep 1 was a little slow but I liked the premise so continued watching and it just keeps getting better. The casting is perfect, with normal looking people living… Read more »

We LOVE Downward Dog and are telling all our friends …and sharing on social media so it gets renewed for season 2.