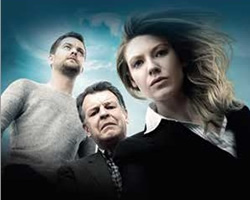 Aside from CW’s 90210, J.J. Abrams’ new show on FOX undoubtedly the most anticipated new show of the Fall season. Fringe debuted last night and, though the numbers weren’t bad (nine million), they were likely a few million less than what FOX execs were hoping for. There’s usually a drop in viewership in a show’s second installment but next week’s episode will follow a new episode of House which will likely help.

Whether next week’s ratings go up or down, FOX will likely stick with the series for awhile. And, thankfully for fans, Abrams has learned a few things since the complicated mythology of his Alias series got out of hand. He’s committed to giving viewers answers to the show’s mysteries.

The key, according to Abrams and his team, is to have a game plan for a series with clearly defined “goalposts” — key plot points that can be moved around as a season or series unfolds. By knowing a series’ finale in advance, the creative team can hope a show continues for many season but can always be prepared to wrap it up.

Series co-creator Alex Kurtzman recently explained, “There’s a large mythology which we all kind of decided on when we wrote the pilot. We knew that, when we went to series we were going to have to reach a certain end point and that end point is very flexible in terms of when we get there. If they [FOX] lets us run for twelve seasons, you’ll see it in season twelve. If they take us off the air after nine episodes you?ll see it in episode nine.” Stay tuned!

So many people here in Australia love the Fringe , I for one can’t get enough I would love to see it run for at least 10 seasons. Please listen to the puplic for a change we are the ones who count !!!!! DON’T CANCEL PLEASE!!!!!

I love Fringe, I watch it whenever I can, please don’t take it off, it’s a good show. Thank you

I LOVE Olivia,Peter and all the rest of the cast.
It is the one show I so look forward to see each week.
Please don’t cancel this show.

Please don’t cancel this show. It’s one of my favorites.

This show is awesome!!! finally something i really enjoy on TV please dont cancel this!

There are few shows worth watching. Fringe is quirky, interesting and bizarre. I hope they have a change of heart.

There are few shows that are as interesting, quirky and bizarre. I hope the network sticks with it. Please.

i love this show… i must admit… i did not care for it when the show first began… however i have to say… i have fallen in love with the characters… and with the story… i hope that this series is not canceled… what can we do as the viewers to make sure that shows of this caliber are not discarded… there has to be a better way than just broadcast television… what about places like hulu, vimeo, or even youtube… isn’t there a way to utilize these resources to gain more capital?

Sweden here, I dont get american television. You just cancel the good shows and keep going with the ****** ones and im not talking about Fringe only.

I love this show and I am a late 40’s medical with 3 residencies in internal medicine, anesthesiology. Psychiatry. I find it interesting creative and ingenious with it concept the chemistry between the ensemble (cast) and the poorly brillant. Come on America Dust off some of your brain and step into an amazing ride.

Fringe has been my #1 favorite show since day one. Please don’t cancel it. It’s so hard to find shows like Fringe on TV….you know…ones that make you use your brain!

I agree with most of the people here. I absolutely the superb cast. Each one takes their role very seriously, especially our adorable heroine. I like the fact that it is played mostly serious (except for the doctor. His one-liners are hysterical!!) I was going to watch it anyway; it’s creepy and right down my alley tastewise. The lack of sickening commercials sure didn’t hurt. I also will trash my tv if this goes off. PLEASE DONT CANCEL THIS MOST ENJOYABLE SHOW. A show my husband and I both agree on…