Growing Up Hip Hop is returning for a sixth season on WE tv. The cable channel has announced a premiere date for the episodes which will feature some new faces. Grammy Award-winning producer Stevie J, daughter Savannah, and son Stevie Jr., as well as famed industry vet Luther “Uncle Luke” Campbell and daughter Cree are all joining the cast of the music industry reality series. The show follows the children of hip-hop legends, including Rev Run and Treach.

WE tv revealed more about the return of Growing Up Hip Hop in a press release.

Rumors run wild over betrayal, heartache, and family secrets, this season on Growing Up Hip Hop, Angela Simmons (Rev Run’s daughter) is hot and heavy with a new love interest, who packs a punch as a professional boxer; but her family, especially sister Vanessa, worry that Angela’s moving too fast and heading towards heartbreak. A battle of dueling weddings between Egypt Criss (Pepa & Treach’s daughter) and her cousin, Tahira “Tee Tee” Francis, uncovers a shocking family secret that no one sees coming. Savannah Jordan (Stevie J’s daughter) is keeping her own secrets from her father and catches the eye of Boogie Dash. Meanwhile, unfinished business between artist Briana Latrise and Boogie comes to a head and leads to a dramatic turn of events. Cree Campbell (Uncle Luke’s daughter) struggles to repair the complicated relationship with her father, who she has been at odds with for years. Jojo Simmons (Rev Run’s son) teams up with Cree and Eric “Lil Eazy-E” Wright Jr. (Eazy-E’s son) to put on an artist showcase with a star-studded lineup of hip-hop legends. The pressure to succeed is higher than ever, targeting acts such as Da Brat, Pep and Uncle Luke… but nothing prepares Jojo and his wife Tanice when tragedy strikes.”

Check out the trailer and poster for Growing Up Hip Hop season six below. 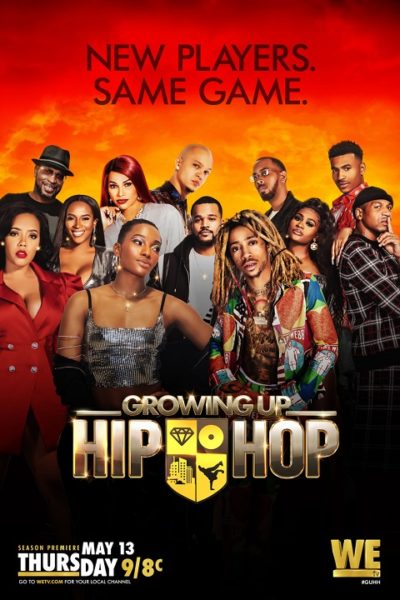 What do you think? Are you a fan of Growing Up Hip Hop on WE tv? Do you plan to watch season six?