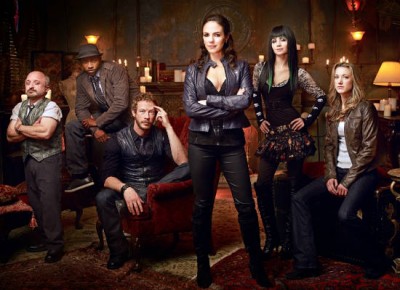 TV show description:
This TV show follows the life of a succubus as she learns to control her abilities, helps those in need, and discovers the truth about her origins.

Bo (Anna Silk) is a Succubus, a mythological creature who uses sex to feed, heal, and kill. Raised as a human by strict adoptive parents, she was taught that sex of any kind was evil. However, at age 17, Bo’s internal need for sexual energy, or ‘chi,’ became so strong that she gave in to her urges. Bo was untutored in her power and unaware of how to control it, which led her to accidentally kill her first lover.

Traumatized by this event, Bo left town and vowed to never succumb to her urges again. It’s a promise she’s incapable of keeping, leaving her with an increasing body count and mounting regrets. But all is not lost: she soon meets the Fae, her ancient, long-warring kin, and is told she can be taught how to control her appetites and have a “normal” life. But first, she must learn which of them to trust. Along the way, Bo uses her supernatural abilities to help others while trying to navigate her first real romantic relationships (and a tense love triangle), take ownership of her sexuality, and find her birth mother to unravel the mystery of her origins.

Bo finds a steadfast ally in Kenzi (Ksenia Solo), a con artist and thief. She’s also an extremely street-smart girl, despite her youth. She is Bo’s main and only true confidante, and her resourcefulness makes her very useful. Using her wide array of contacts, Kenzi can get Bo whatever she needs in virtually any situation. Kenzi’s more savvy and cynical nature makes her very protective of Bo, as Bo can be fooled in ways that Kenzi can’t. Kenzi has had darkness in her past, but unlike Bo, she refuses to dwell on it as Kenzi is a true survivor. Regardless of her past, Kenzi’s future goal is simple: To do whatever she can to protect Bo from a world that will never understand her as well as Kenzi does.

Dyson (Kris Holden-Ried) is Bo’s mysterious and sexy Light Fae love interest. He’s also her first lover to ever survive a night with her. He works undercover for his people as a “human” homicide detective and helps to keep the existence of the Fae a secret where he can. His desire to protect Bo is often at odds with the whims of his Fae superiors, complicating his life, and their romantic relationship. A lone wolf at heart, Dyson hates how in love he is with Bo, and resists it as long as he can. The palpable sexual tension between them makes the moments when they do have sex extremely passionate as the duo fight for dominance in and out of bed, but the biggest surprise for them both is the deeper feelings they begin to develop — and how far Dyson is willing to go to save Bo.

In the human world, Hale (K.C. Collins) is a detective and Dyson’s partner on the force. In the Fae world, he’s a handsome male “Siren” who’s capable of swaying others with his beautiful voice. He’s the eternal bachelor and the ultimate wingman, never afraid to flirt with the ugly girl at the bar so you can go home with her hot friend. A talented cop, Zen and charming, Hale’s greatest strength is understanding politics. He does his best to protect impatient Dyson from getting himself in trouble with their human or Fae bosses. It’s an impossible task, and gets even tougher when Bo arrives on the scene.

Trick (Rick Howland) is the mysterious old owner and bartender of The Dal Riata tavern. It’s a “way station” that serves as neutral territory for the local Fae, and where all traveling Fae must check in and make their allegiances known. Politically savvy (if not also politically ambitious), Trick is additionally a secret confidante and mentor of Dyson’s. He’s also the guardian of secret, particular knowledge of Bo’s true origins. Until he’s sure he can trust her, he’s determined to keep Bo from finding out the truth about who she really is. But the longer he spends with Bo, the more protective Trick seems.

The childhood of Lauren (Zoie Palmer) was very different than Bo’s. Growing up in an upper middle class household, she is much more cultured and graceful. Lauren is in The Ash’s service working as a scientist, and studies life forms that many humans will never know even exist (like Bo). Lauren offers her medical knowledge to Bo to help gain control of her hungers and protect her from the Fae punishments. This gesture from Lauren, which poses a risk to herself, is what convinces Bo that Lauren is pure-hearted, while Dyson and Kenzi are both skeptical. While helping Bo, Lauren’s true intentions are to give The Ash more information about Bo and to understand her origins. Lauren develops true feelings for Bo as their relationship continues and this makes it harder and harder for Lauren to lie.

Series Finale:
Episode #77 — Rise
The team realizes that Bo protected them with the horseshoe forged by the gods. It’s a pretty big risk to take and Bo is weathering it the best she can. Back at Hades’ groovy apartment, she slips Tamsin a key to the cell with a kiss, and pretends to kill her. But Hades is onto this plan – he shouts at her, wears her down, and then watches as Bo sucks the chi out of everyone in the city.

The gang realizes what’s happening as they drive through town in Vex’s impressive van. Their worst fears are realized, Bo has gone full Pyrapus and killed just about everyone except for them: everyone including the dark and the light Fae in The Dal. Bo proclaims herself the Queen over all the Fae, and that’s when Hades realizes that there are still some people alive and sends her off to find her old friends.

Hades gets all of the cops of the city to become his servants, but the horseshoe is still protecting the gang – that is until Tamsin arrives in full Valkyrie mode and takes down the cops. It’s a brief safety, because soon Bo arrives in full evil Queen mode and the only one who can bring her back is her heart: Kenzi, who tells her all kinds of adorable rhyming things. Unfortunately, it doesn’t work and Bo breaks the horseshoe and steals all of their chi!

That’s when the flashbacks start. Bo remembers the love of her family and stops herself just in time – this is when Bo realizes that the only way she can take down Hades is to go full Pyrapus: even though it’s a risk that she’ll kill everyone again.
That’s when Tamsin goes into labor, the most powerful fFae arrive – under Hades control and Hades returns to confront Bo. Epic battles ensue! Vex tries to mesmer the Fae, Lauren delivers Tamsin’s baby, Bo and Hades engage in a battle with their hands and her power overcomes his. Why? Because she has both light and dark inside her while he just has darkness. Let that be a lesson to us all.

After defeating Hades, Bo goes full powerful Queen and gives everyone their chi back from the rooftop of Vex’s van just as the team gathers to meet Tamsin’s baby and Vex and Marc bond end up holding hands. When Bo wants to breathe chi into Tamsin (because remember that all Valkyries die in childbirth), Tamsin refuses, names the baby Dagny, and dies. Or as it’s called for Valkyries in their last life: rising.

Bo leaves the baby in the care of Kenzi and goes off to save the world, gets pretty much engaged to Lauren, and then everyone goes flashing forward to the future, where a teenage Dagny is taken to the Dal. Dagny signs the ledger, is told she doesn’t have to choose between light and dark anymore and learns evil is coming for her, as is evidenced by the handprint Hades left on her. When she asks what happens next, Bo tells her they’ll protect her. And so they will. (Courtesy Syfy.)
First aired: March 21, 2016.

What do you think? Do you like the Lost Girl TV series? Do you think that it should have ended or continued for a sixth season?

This show should definitely continue! Exciting and intriguing with so many twists and turns.

I am so much in love with this show. Why would a show even think of ending it’s run after such a so many successful seasons?. Its crazy in my opinion to end it when there are so many fans. I am looking forward to season five. Hope it airs here in San Diego!
can’t seem to find an Air date. 🙁 Don’t like being left hanging though on the k
kenzi issue.
Hope in season five they at least bring her back. YES TO A SEASON SIX !!

I would like to see LOST GIRL come back!!!!

If Kenzi doesn’t come back, I’m not interested in watching the show. She was the best of the show!

This shows pretty good. I watch a lot of tv and ran out of shows to watch on Netflix and randomly chose Lost Girl and I have been hooked ever since…plus Bo is freaking hot

i would watch this show for life i think on the condition that at least one of my favorite characters returns in coming seasons.

My daughter and I both love the show and can’t wait for the next season. We wish there were more episodes per season. We would follow the show indefinitely as long as scripts are kept interesting…….and situations do not get too long and drawn out. (Like Mentalist & Hawaii 5.0.) We have watched the show from the beginning and consider ourselves faithful fans.

I’m into the supernatural stuff. I love this show. Bo and Kenzi are amazing.

i love lost girl! I would love to see it conitue for at least 3 more years

[…] Bo (Anna Silk) find a way to consistently handle her succubus abilities? Will Lost Girl continue to generate ratings so that Syfy will keep renewing the series for additional seasons? […]