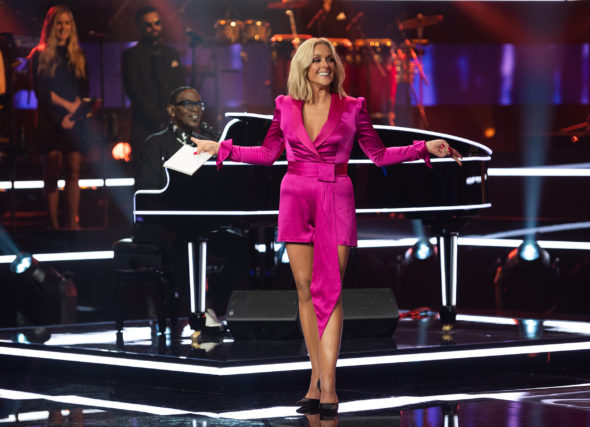 TV show description:
This music game show began as a series on NBC Radio in 1952. A year later, it moved to television on NBC and later, to CBS. It was revived on NBC in the 1970s and several times in first-run syndication.

This version of the Name That Tune series tests contestants’ music knowledge as they battle it out in an assortment of challenging musical games for cash and prizes. Each hour episode is comprised of two stand-alone half-hour contests. Two players play against each other as they race against the clock to test their knowledge of songs, performed by the live band.

Each contest features a rotating variety of games from the original format, before the iconic Bid-a-Note round. The player with the most money at the end of Bid-a-Note wins the game and takes his or her bank into the Golden Medley bonus round. There, the player has a chance to win additional cash and potentially the $100,000 grand prize.

What do you think? Do you like the Name That Tune TV show? Do you think it should be cancelled or renewed for another season?

I thought I would like the show, but Jane is a terrible hostess. She has two outfits, literally. The pink satin romper and the black sparkly jacket with thigh high boots. The show seems to be less about naming that tune than it is her chance to try to get back on a tv series.

The host just is not good. Wardrobe is awful . The show pretty good but the hostess is very fake!

Use to really enjoy the original show. Tired of Janes outfit & trying to be a sex symbol, I’m no prude but she is offensive to watch to a women with my man. I’m just waiting for a “wardrobe malfunction “

Show is not so exciting, RANDY looks weird like he can’t bend or something, looks like he has a stick up his butt. When he turns it’s like he’s a robot, he turns at his waist. I really liked him on American Idol, he was real then. Now he appears to be fake. Host Jane seems so phony, can’t stand her wearing the same clothes all the time and they are so low cut, why? She loves to get the attention on herself with trying to sing a little bit. She is such a drama queen. Put something else on.

I agree it’s soooo weird with Randy in the middle commenting and the surprise gift thing needs to go soo weird you just won a scooter!! I thought I’d like this show but it really needs a revamping

Why would she wear the same thing all of the time,2 outfits Really,everyone is right she needs to go to save the show.Whose idea was it to sing the bonus prize?Stupid stuff.

I thought the same outfit meant no clothes change between taping of shows done on same day…. surely the budget could afford different fashions or even colors. outfits shouldn’t be repeated – take hint from other game show hosts.

Jane might be running out of moves, too…. like clothes 🙁
She doesn’t have to wear low cut… just different threads & colors.