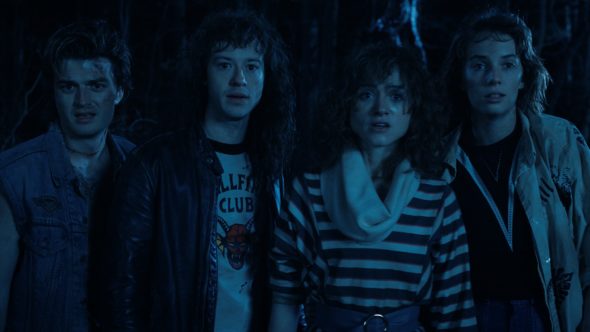 Stranger Things returns to Netflix with the last two super-sized episodes of season four, and with a fifth and final season already ordered – viewers have lots more to see before the series ends. Creators Matt and Ross Duffer are also considering a Stranger Things spin-off to continue the franchise.

Per Deadline, the Duffer brothers spoke about the possibility of a spin-off. Ross said the following:

“There’s a version of it developing in parallel [to season 5], but they would never shoot it parallel. I think actually we’re going to start delving into that soon as we’re winding down and finishing these visual effects, Matt and I are going to start getting into it.”

Matt offered his own comments:

“The reason we haven’t done anything is just because you don’t want to be doing it for the wrong reasons, and it was just like, ‘Is this something I would want to make regardless of it being related to Stranger Things or not?’ And definitely. Even if we took the Stranger Things title off of it, I’m so, so excited about it. But it is not… It’s going to be different than what anyone is expecting, including Netflix.”

The fourth season of Stranger Things resumes on July 1st.

What do you think? Are you excited to see the return of Stranger Things later this week? Would you check out a spin-off?

Sounds like a vehicle to carry on with Eleven.

What kind of spin-off?? How would it be related?

ok forward to seeing it new series hopefully good as original series is.