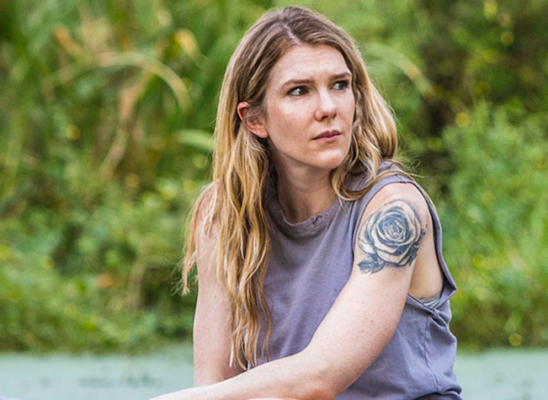 The secret is out. Amazon has picked up the previously cancelled TNT TV show Tell Me Your Secrets.

The thriller “revolves around a trio of characters, each with a mysterious and troubling past: Emma (Lily Rabe) is a young woman who once looked into the eyes of a dangerous killer, John (Hamish Linklater) is a former serial predator desperate to find redemption, and Mary (Amy Brenneman) is a grieving mother obsessed with finding her missing daughter. As each of them is pushed to the edge, the truth about their pasts and motives grows ever murkier, blurring the lines between victim and perpetrator.”

Tell Me Your Secrets was initially ordered to series by TNT in 2018 but the studio later dropped the series. Now, Prime Video Prime has picked up the TV show, which is slated to debut on the streamer in 2021.

Here’s the announcement from Amazon:

CULVER CITY, Calif. – Oct. 29, 2020 – Amazon Prime Video announced today the acquisition of the series Tell Me Your Secrets, a new psychological thriller. Created and written by Harriet Warner and co-produced by Bruna Papandrea’s Made Up Stories, Tell Me Your Secrets is an intense, morally complex thriller starring Lily Rabe (American Horror Story), Amy Brenneman (The Leftovers), Hamish Linklater (Legion) and Enrique Murciano (The Blacklist). The 10 episode drama revolves around a trio of characters, each with a mysterious and troubling past: Emma (Rabe) is a young woman who once looked into the eyes of a dangerous killer, John (Linklater) is a former serial predator desperate to find redemption, and Mary (Brenneman) is a grieving mother obsessed with finding her missing daughter. As each of them is pushed to the edge, the truth about their pasts and motives grows ever murkier, blurring the lines between victim and perpetrator. Also starring is Murciano as Peter Guillory, a therapist with seemingly good intentions.

Tell Me Your Secrets is co-produced by Bruna Papandrea’s Made Up Stories and Turner’s Studio T. In addition to serving as creator and writer, Harriet Warner (Dangerous Liaisons) is also an executive producer along with Papandrea (The Undoing, Big Little Lies) and Casey Haver (Queen America) for Made Up Stories, and John Polson (Elementary) who also directed the series.

The series will premiere in 2021 on Prime Video in the U.S., Canada, Australia and New Zealand.

About Prime Video
Prime Video offers customers a vast collection of movies, series, and sports – all available to watch on hundreds of compatible devices.

Prime Video Channels: Prime members can add channels like CBS All Access, BET+, EPIX, Noggin, NBA League Pass, MLB.tv, STARZ and SHOWTIME, , – no extra apps to download, and no cable required. Only pay for the ones you want, and cancel anytime. View the full list of channels available at amazon.com/channels.

Instant access: Watch at home or on the go with your choice of hundreds of compatible devices. Stream from the web or using the Prime Video app on your smartphone, tablet, set-top box, game console, or select smart TV. For a complete list of compatible devices, visit amazon.com/howtostream.

Enhanced experiences: Make the most of every viewing with 4K Ultra HD- and High Dynamic Range (HDR)-compatible content. Go behind the scenes of your favorite movies and TV shows with exclusive X-Ray access, powered by IMDb. Save it for later with select mobile downloads for offline viewing.

Prime Video is just one of many shopping and entertainment benefits included with a Prime membership, along with fast, free shipping on millions of Prime-eligible items at Amazon.com, unlimited photo storage, exclusive deals and discounts, and access to ad-free music and Kindle ebooks. To sign up or start a 30-day free trial of Prime, visit:amazon.com/prime.

ABOUT MADE UP STORIES
Made Up Stories is a development and production company that amplifies distinctive voices to tell unforgettable stories about the diversity of human experience, driven primarily by multifaceted females on and off-screen. Made Up Stories was founded in 2017, and is run by Bruna Papandrea, the award-winning producer of the HBO series BIG LITTLE LIES, nominated for five Emmy Awards for its second season (and awarded 8 Emmy Awards, 4 Golden Globe Awards, and more, for its first season. Made Up Stories recently produced the film adaptation of the inspiring international bestseller, Penguin Bloom, directed by Glendyn Ivin and starring Naomi Watts, Andrew Lincoln and Jacki Weaver, which premiered at the 2020 Toronto International Film Festival, and THE DRY, based on the Jane Harper novel, from director Robert Connolly and starring Eric Bana. On the television side, Made Up Stories’ HBO series THE UNDOING starring Nicole Kidman and Hugh Grant, directed by Susanne Bier and created by David E. Kelley premiered October 25, 2020. Additional projects in various stages of production include: NINE PERFECT STRANGERS, based on best-selling author Liane Moriarty’s book, written by David E. Kelley and John Henry Butterworth, and starring Nicole Kidman and Melissa McCarthy for Hulu; the Netflix thriller PIECES OF HER, adapted from Karin Slaughter’s book, created by Charlotte Stoudt and directed by Minkie Spiro, starring Toni Colette and Bella Heathcote; and ANATOMY OF A SCANDAL, based on the international bestseller by Sarah Vaughan, created by David E. Kelley and Melissa James Gibson that S.J. Clarkson will direct, starring Sienna Miller and Michelle Dockery, for Netflix.

What do you think? Are you a fan of thrillers? Will you check out Tell Me Your Secrets on Amazon Prime Video?

Hoping there is a season 2 of “Tell Me Your Secrets”!!!

I loved Tell Me Your Secrets. I am an avid fan of thrillers but can usually predict the plots. This, however, had enough twists to keep me binge watching to the end. More, please. And, thank you,

I love this show Tell Me Your Secrets. I really hope it gets picked up again because other than this story on season 1 it can still continue with the storyline and maybe add in another case. PLEASE don’t cancel this one because it seems everytime I like a series it always gets cancelled please don’t do that….Thank You!