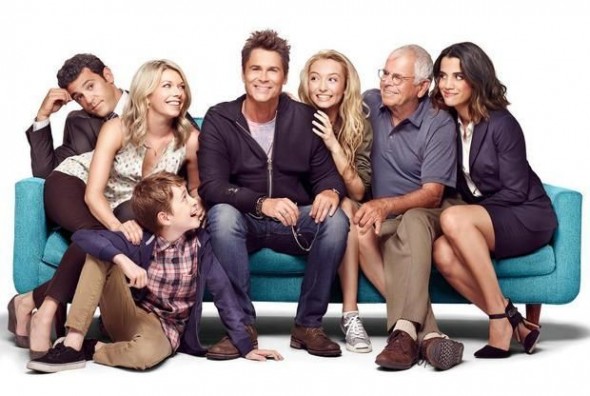 TV show description:
This is legal/family comedy follows a fictional superstar lawyer who transitions from small screen to small town.

Hollywood icon Dean Sanderson, Jr. (Rob Lowe) returns to his hometown after his TV show is suddenly cancelled. He receives a hero’s welcome from his family, especially from his number one fan and father Dean Sanderson, Sr. (William Devane). Head of the family’s real life law firm, he’s infinitely proud of his handsome and successful actor son.

Feeling that the time is right for a life of normalcy and value, Dean decides his next move should be to help out at his family’s firm. With no formal legal training (though having a played a successful lawyer on one of television’s most watched shows for eight seasons), he believes he is more than qualified to practice.

His uncompromising and intense character on The Grinder is a far cry from the real life courtrooms where his brother has worked tirelessly for so long. Oblivious to his brother’s concerns and real life due process, clients are delighted to have the supposedly legendary lawyer represent them.

Series Finale:
Episode #22 —
Dean Sr.’s malpractice trial is finally at hand and it will come to a surprising conclusion when Stewart gets sidelined, leaving it to the rest of the Sanderson & Yao team to save the firm and find out who has been the secret mastermind behind Cory Manler and Dean Sr.’s case. Stewart is concerned that Dean’s instincts and Grinder-isms won’t be enough to win the day, and Dean is offended by his own brother’s lack of faith.
First aired: May 10, 2016.

What do you think? Do you like The Grinder TV show? Do you think it should have been cancelled or renewed for a second season?

So disappointed fox we need season two I was looking forward :/

Why is it that every time Fox has a good show it gets cancelled. The Grinder was so funny and well written.The actors were fantastic and I could hardly wait from week to week to be entertained. Please consider bringing it back. Fred Savage is a favorite as well as Rob Lowe. Great show. What a shame it was cancelled.

Bring it Back! Awesome and funny show!

I feel so disappointed The Grinder was cancelled! The sharp, clever dialogue and fresh idea was so entertaining, and Rob Lowe was especially fantastic. I got so caught up in it while on the treadmill I forgot iI was running which is exactly the kind of distraction I needed. Please bring it back!

I can’t believe that they cancelled The Grinder. It was one of the few shows that I made sure I watched, I even used to watch reruns on demand! Rob Lowe was a pisser, and not only a great actor, but excellent comedian. The plots were great. I’m so disappointed in FOX. The only other shows I care about are Second Chance, Lucifer and Last Man on earth. Well FOX thanks for saving 2 out of 4. Bad decision making. Why doesn’t anybody ask my opinion? PLEASE BRING IT AND SECOND CHANCE BACK!!!

My husband and I LOVE The Grinder! I wish Fox would change their minds about this one and give it another chance. It’s well-written, hilarious, and intelligent! Please bring it back!!

My husband and I love this show! We laugh till we cry. It’s a unique show and the actors play off each other so well. There isn’t one character that we don’t like although Fred and Rob steal the show (William Devane is up there too!). Funny and warm. Cancelling this show is a big disappointment.

My husband took the news that this show was cancelled very hard. He started watching it because I’d suggested it and told him it was hilarious. He didn’t like it at first, but after the third episode it was his favorite tv show. I think this was one of the reasons why it was cancelled. People did not give it enough time!!! I think it was so cleverly written and acted (the children ALWAYS made me laugh!!) so sad this show is cancelled when there are so many shows that are THE SAME PREMISE as so many others. SMH

Quite disappointed in Fox for letting another terrific show go. I certainly hope all involved tried to air this lovely show on other networks. So bummed…Roe

Finally, an intelligent and funny tv show – and it’s cancelled. Why?

I LOVED :The Grinder”! Very clever and original. I had little respect for any Fox shows except The Simpsons until “The Grinder” came along. There is so much crap on all the broadcast and cable networks. I hope one of them picks up “The Grinder” and runs with it.

We are so bummed to hear that The Grinder was cancelled. Savage was a great straight man to Lowes character. We really looked forward to each new episode. People don’t watch shows they don’t know exist.

I can’t believe The Grinder has been canceled. Say it so….bring back Savage and Lowe! Truly hilarious.

Please bring it back! It was so well acted and cleaver.

This was a great show, witty and original.