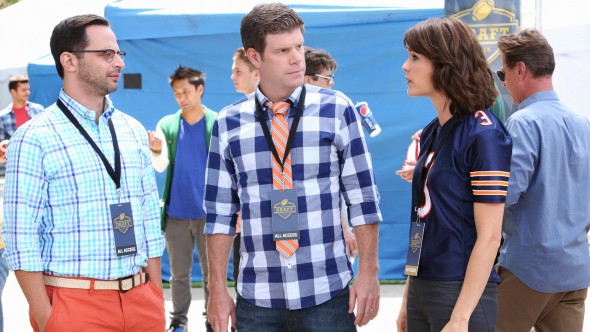 The end is nigh. With the series finale of FXX’s The League airing tonight, creator Jeff Schaffer spoke to TVLine about the end of the series and what he hopes fans get out of it.

Speaking to TVLine, Schaffer said the finale will feel “like any other episode of The League.” He also mentioned that while certain storylines will be wrapped up, he hopes the finale will have fans saying “‘I can’t wait to see what happens,’ or, ‘I have to see another one.’”

The finale will see the return of Shiva, Paulie Litt’s The Oracle, and “the coolest guest star we’ve ever had on the show,” Schaffer said. Word is that guest star will be none other that Curb Your Enthusiasm‘s Larry David.

The season finale airs tonight on FXX and will be a full 30 minutes long, instead of the normal 22. Schaffer mentioned that an extended, hour-long version of the finale will be available at some point.

What do you think? Are you a fan of The League? Are you sad to see it end? What do you hope happens in the finale tonight?

Well this sucks. This show was hilarious…..seemed like it could have easily continued for a few more years.

I don’t want the show to end, but I’m glad it’s ending before it stops being funny. Some shows air way beyond their prime amd completely go to ****. I’m glad the League will forever be safe from that fate, and thank sheva it ended on such a high note (season 7 was amazing!!).

I can’t believe that after 7 glorious seasons the league is over. I wish netflix would pick it up so I could continue seeing more of this the show renewed my interest in fantasy football and is the best comedy I’ve seen on TV since raising hope. I hope it continues somewhere else I will tell so many people if the show gets renewed to netflix or hulu or any other site. If not thank you for everyone who put together 7 great seasons of the league. Great job!

Really wish they would keep going. I liked the league just as much as always sunny please make an 8th sea! Now that season 7 is on Netflix more people will want more!

They can’t stop the league!!!! This is buffoonery at it’s max

Don’t cancel it!! there is still so much more to happen! what about the baby!

I would like to see a season 8 of The League. I was hoping they would have brought it back.

Guys you need to do a season 8 of the league with more sick **** from Rafi and dirty randy!!

SO BUMMED!!!!
The League is an amazing show. It’s one of the funniest things on so yes of course they cancelled it.

Come on some smart network out there or Netflix has to see the potential of this thing. SEASONS 8,9,10 and a MOVIE

I didn’t start watching this show until midway through the second season, but I was instantly hooked and was actually inspired to create my own fantasy football league! This show has a great cast and they all have great chemistry. Season 5 and 6 were kind of Meh so I understand cancelling the show since the scripts were running a bit dry, but season 7 was actually incredible! I would love a season 8. I also understand ending the show.

It’s cause they have the show play at the same time as South Park. Of course everybody’s going to watch the new south park episode and than watch the league as a rerun

Its the funniest thing on television of course Fox co. is canceling it. What are you new here?

So true they also cancelled another favorite in raising hope. Stupid fox co.

I can’t believe that they are canceling one of the funnier shows on TV, I will really miss “The League,”with all the fantasy football fans in this country, what happened? The whole cast are great as well as the writing,it’s really a shame!

You know what happened? They fucked up and have the show play at the same time as south park. No **** I’m going to watch the new South Park episode and watch the league episode as a rerun