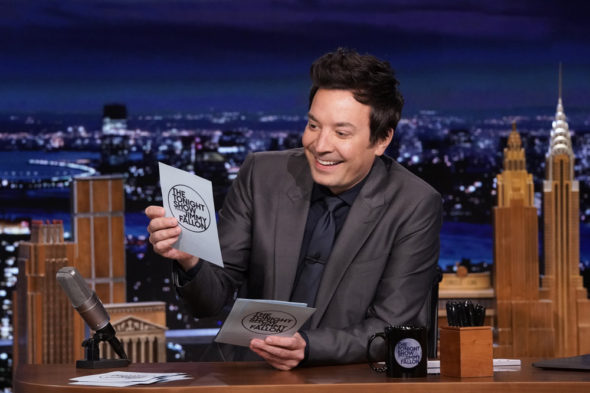 Jimmy Fallon is staying in late-night. NBC has renewed The Tonight Show Starring Jimmy Fallon for five years which is understood to be the longest commitment that the network has made to the host yet.

It’s believed that the deal with Fallon was struck last fall, around the time Jamie Granet-Bederman took over as showrunner.

The Tonight Show franchise has been running since 1954 and previous hosts have included Steve Allen, Jack Paar, Johnny Carson, Jay Leno, and Conan O’Brien. Fallon took over from Leno in 2014 when the latter completed his second tenure as host. To date, Fallon has hosted more than 1,400 episodes.

What do you think? Do you enjoy The Tonight Show Starring Jimmy Fallon TV show? Do you typically watch complete episodes or clips?

I don’t particularly care for Jimmy Fallon. Can be annoying, and he talks like a teenager. Johnny Carson and Jay Leno were the best.

Most definitely. I have watched all the Password games; including All the reboots. It is my favourite game show. I can’t wait for it to start. I also hope I’ll see Betty White on the show in some capacity as she is the legend; besides her late husband. I think she is 99 years old now. Can’t wait!!!!

They are talking about the tonight show, with Jimmy Fallon