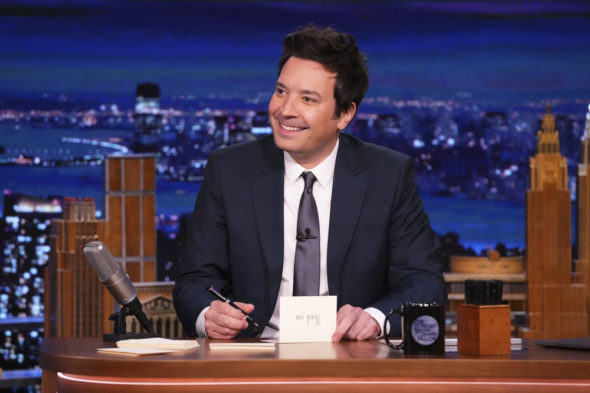 Password is getting a reboot. NBC has ordered a revival of the classic game show with Jimmy Fallon (above) involved. However, Buzzer Blog made it clear that it is not known if he is hosting the series or just producing.

Viewers of The Tonight Show Starring Jimmy Fallon will recall that Password is sometimes played on the late-night series but Fallon is typically a player while announcer Steve Higgins leads the game.

The original Password aired starting in 1961 on CBS. The series has been rebooted several times since the original production aired for six seasons.

NBC did not reveal when the series would premiere on the network, but it is likely to air at some point during the 2021-2022 season. Password is coming from Fremantle, the company behind American Idol.

What do you think? Are you planning to check out Password when it lands on NBC? Who would you like to see as host?

One of my favorite shows of all time, cant wait. I think theme weeks would be fun athletes, comedians, musicians, actors would be fun!

I would like to see jimmy fallen host it

I loved Password and I’m excited it is returning!! I’ll watch for sure.

I’d like to see Steve Higgins host the new NBC Password. He would be perfect for that job. Jimmy Fallon can produce.

As long it is like Super Password when it was on NBC when Bert Convy hosted it, then it should be OK

Can’t stand the guy so if he hosts we won’t be watching.

I will check it out. Don’t like Fallon, so he can produce all he wants, just not crazy about looking at his kisser or hearing his voice.

Oh, so Fallon is not hosting the show, but neither is Betty White.