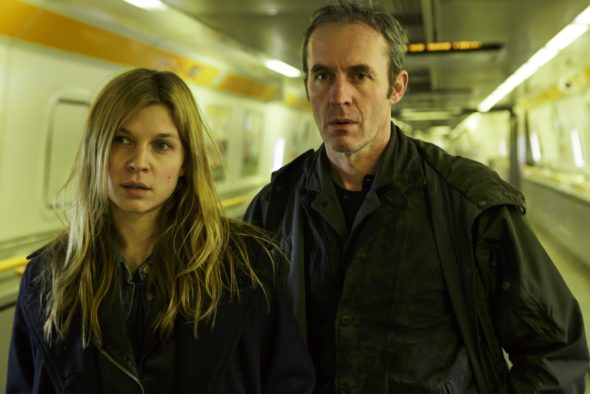 The Tunnel is coming to an end. Recently, PBS announced the TV show’s third and final season will premiere in July.

The UK crime drama “tackles an escalating refugee crisis and examines the increasing threat of terror occasioned by disenfranchised, exiled souls on whom society has turned its back.” The cast includes Stephen Dillane and Clémence Poésy,

The third and final season of The Tunnel premieres on PBS on July 1st at 10:30 p.m. ET/PT.

The emotional final season of the critically acclaimed bilingual crime thriller reunites Stephen Dillane (“Game of Thrones”) in his International Emmy Award-winning role as Karl Roebuck with Clémence Poésy (Harry Potter and the Deathly Hallows: Part II) as Elise Wassermann for the last outing of this beloved and unlikely Anglo-French partnership.

In THE TUNNEL: VENGEANCE, the investigative pair takes on a toxic and terrifying folie � deux whose mutual defining quality is an existential death wish. When the question posed by the couple – what is a life worth? – is directed straight back at Karl, he is forced to confront an utterly impossible choice that will haunt the audience long after the closing credits.

Set amidst mid-Brexit hysteria, THE TUNNEL: VENGEANCE tackles an escalating refugee crisis and examines the increasing threat of terror occasioned by disenfranchised, exiled souls on whom society has turned its back.

Full episodes of THE TUNNEL: VENGEANCE will stream for free simultaneously with each broadcast and be available for two weeks on all station-branded PBS platforms, including PBS.org and PBS apps for iOS, Android, Roku, Apple TV, Amazon Fire TV and Chromecast. PBS station members can binge all episodes via Passport on July 1 (contact your local PBS station for details).

THE TUNNEL: VENGEANCE will be available on DVD from PBS Distribution and can be purchased at ShopPBS.org. The series will also be available for digital download.”

What do you think? Have you seen The Tunnel? Will you watch the final season?

I loved The Tunnel. The characters were believable and who didn’t love the character Elise. Why would the writers kill her. I know this was the final season, although that was a crazy idea because it could have gone on for at least another 4 seasons or more. The characters, story line and everything about this series was wonderful. Although for an old person like me you could have kept the subtitles on a few seconds more. When there is so little to watch on TV I don’t understand taking the wonderful series off the air.

Warning Spoiler Alert! I have watched all three versions of this series and the Tunnel was my favorite. I fell in love with the characters especially Elise. I just finished season three and it broke my heart. I cried, then then I got angry at the writers. I trusted them. I followed and fell in love with the characters and they KILLED them! You are supposed to kill leading characters you’re supposed to find some kind of miraculous resolution to the climax. Real life is full of loss. My life has been full of loss. Great show, great writing but… Read more »

This is one of the best shows on TV. PLEASE do not cancel. Though I cannot imagine which direction it might go after the shocker ending of season 3 I would be very sorry to see the series end. It is amazing: characters, story line(s), everything!

Please do not cancel The Tunnel. It is a great series. We want more of Karl and Elise.

Please don’t cancel The Tunnel. It’s one of the best shows on TV. It seems every time a great series begins you cancel it. Hopefully Netflix or Amazin Prime will be smart enough to pick it up.
Very disappointed!

I always enjoy PBS shows and will definitely watch season 3 of The Tunnel.

Enjoyable, gets your brain working. Wonderful.
Curious to see the third and final season.

It’s a good show. Glad to see a third episode.