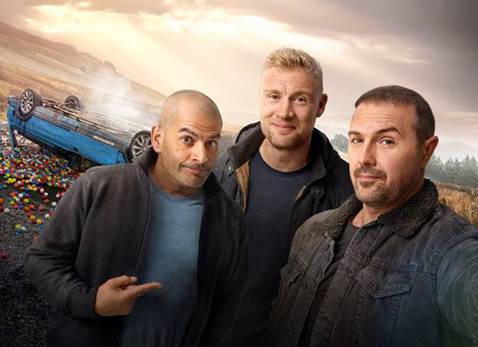 Time to get ready for a new season of Top Gear. The car series will premiere a new special and fresh episodes in August. Paddy McGuinness, Freddie Flintoff, and Chris Harris are the returning hosts.

BBC America revealed the following about the return of the series:

“The world’s biggest motoring entertainment show returns this summer with the Top Gear Nepal Special and all-new episodes on BBC AMERICA. The special sees the team embarking on an epic high-altitude voyage from Kathmandu to the Forbidden City of Lo Manthang.

Returning hosts Paddy McGuinness, Freddie Flintoff and Chris Harris have been a hit with viewers and critics alike. Expect to see bungee jumping in a car, an epic race between a fighter jet and the latest McLaren hypercar, a spectacular road trip through Peru and more mischief as they travel the globe in pursuit of hijinks and motoring mayhem.

Check out the trailer released for the new season below.

What do you think? Are you excited for the return of this BBC America car series?

It will be interesting to see what Americans think of the presenters.

Chris Harris will be easy but the Northern accents of Paddy McGuinness and Freddie Flintoff and their oft dry British wry humour may take them some getting used to.

But persevere and it will be worth it.

These are the same three who were on last season. If you watch that to catch up you’ll see they really jelled toward the end of the season. Plus Occasional visits from German beauty Sabine Schmitz and The Stig round out the cast. Not quite The Grand Tour but still very good.

This Channel is so bad! Just repeat nature shows night after night.
It should be like Acorn or Britbox, and have shows like that.

Never mind those wannabes. When’s The Grand Tour (AKA the REAL Top Gear) coming back?

Sadly the original 3 have opted to do only the special and so the spirit of Top Gear and The Grand Tour with them has all but vanished.

Time for them to perhaps ease into retirement.