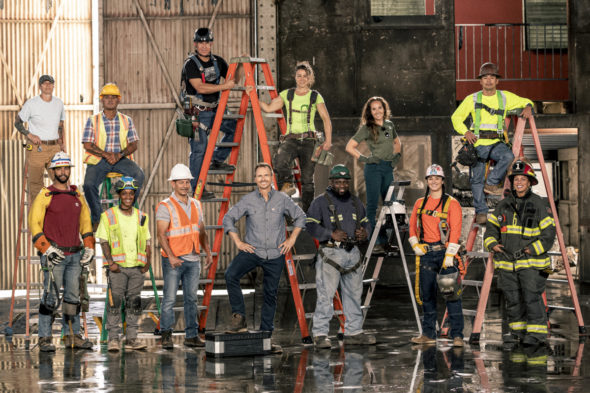 Would you have what it takes to compete in this series? Has the Tough As Nails TV show been cancelled or renewed for a fourth season on CBS? The television vulture is watching all the latest cancellation and renewal news, so this page is the place to track the status of Tough As Nails, season four. Bookmark it, or subscribe for the latest updates. Remember, the television vulture is watching your shows. Are you?

Airing on the CBS television network, the Tough As Nails TV show is hosted by Phil Keoghan of The Amazing Race. The series celebrates everyday Americans who roll up their sleeves and don’t think twice about working long hard hours and getting their hands dirty, in order to keep their country running. In the show, competitors consider the calluses on their hands a badge of honor and are tested for their strength, endurance, life skills, and most importantly, mental toughness in challenges that take place at real-world job sites. Even after they “punch out” of the individual competition, they will have the opportunity to win additional prizes in the team competitions that continue throughout the season. At the end of the season, the winning individual contestant will be crowned as the Tough as Nails champion and will win big prizes. Competitors this season are Kelsy Reynolds, Christine Connors, Takeru “Tak” Tanabe, Jerome Kupuka’a, Lamar Edwin Hanger, Lia Mort, Dequincey “Quincey” Walker, Kalimba Edwards, Mike Shaffer, Elizabeth Rillera, Sarah Ham, Alfredo “Alfie” P. Rivera.

The third season of Tough As Nails averages a 0.41 rating in the 18-49 demographic and 2.86 million viewers in the live+same day ratings (includes all DVR playback through 3:00 AM). Compared to season two, that’s down by 10% in the demo and down by 10% in viewership. While these numbers don’t include further delayed or streaming viewing, they are a very good indicator of how a show is performing, especially when compared to others on the same channel. There can be other economic factors involved in a show’s fate, but the higher-rated series are usually renewed and the lower-rated ones are cancelled. Find out how Tough As Nails stacks up against other CBS TV shows.

We don’t have to wonder if CBS will cancel or renew Tough As Nails since it’s already been renewed for a fourth season.  The show’s been a respectable performer so, will the programmers start running cycles twice a year (ala Survivor) or could it alternate with The Amazing Race, Keoghan’s other gig?  I’ll update this page with breaking developments. Subscribe for free alerts on Tough As Nails cancellation or renewal news.

What do you think? Are you glad that the Tough As Nails TV show has been renewed for a fourth season already? How would you feel if CBS cancelled this TV series, instead?