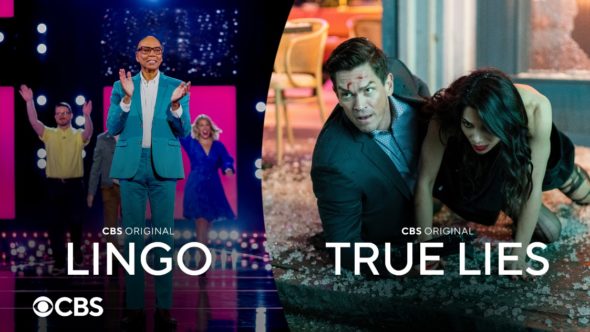 CBS has announced its plans for midseason, and they include the premiere of two new series and two returners. True Lies is based on the 1994 action-comedy film, and Lingo is a word game show that’s based on an established format. Meanwhile, the fourth season of Tough As Nails and the 44th season of Survivor will also premiere.

TRUE LIES, inspired by James Cameron’s hit action-comedy film of the same name, premieres on a special night and time, Thursday, Feb. 23 at 9:00 PM, ET/PT. The drama moves to its regular time period on Wednesday, March 1 at 10:00 PM, ET/PT, with a lead-in by a special two-hour premiere of SURVIVOR, hosted by Jeff Probst, from 8:00-10:00 PM, ET/PT.

About LINGO and TRUE LIES

LINGO is a new, supercharged adaptation of the word-twisting, fast-thinking game show. Host RuPaul Charles brings his one-of-a-kind personality to this clever, competitive and unpredictable game where teams of two face off in fast-paced puzzle rounds to guess letters that reveal seemingly simple words. At the end of each one-hour episode, packed with witty commentary and gameplay, the two winning teams will make it through to a nerve-racking final showdown where one team will walk away with an additional big cash prize. The “Lingo” format has been sold in more than 17 territories, with versions of the hit show produced in major markets, including the U.K., Italy, Spain, the Netherlands and France. There is a “Lingo” boardgame, Facebook game and app available.

TRUE LIES, inspired by James Cameron’s hit action-comedy film of the same name, follows Harry (Steve Howey), a first-class international spy for U.S. intelligence agency Omega Sector, and his wife, Helen (Ginger Gonzaga), a language professor bored with her daily routine, who makes the shocking discovery that her seemingly ordinary husband is leading an extraordinary double life. With the secret out, Omega recruits Helen, who impresses everyone with her formidable skills (thanks to Tae Bo and yoga), and she joins Harry and his team of top-notch operatives, embarking on covert missions around the globe and an exhilarating life of danger and adventure … all while keeping their adventures a secret from their two teenage children. The renewed bond between them adds much-needed sizzle to the Taskers’ emotionally distant marriage and upends the top-secret world of Omega Sector. But, as Harry says, if you’re going to save the world, you might as well do it for the ones you love.

What do you think? Which new or returning CBS shows do you plan to watch in early 2023?

Happy to read Tough As Nails is coming back

What happened to the The Equalizer?