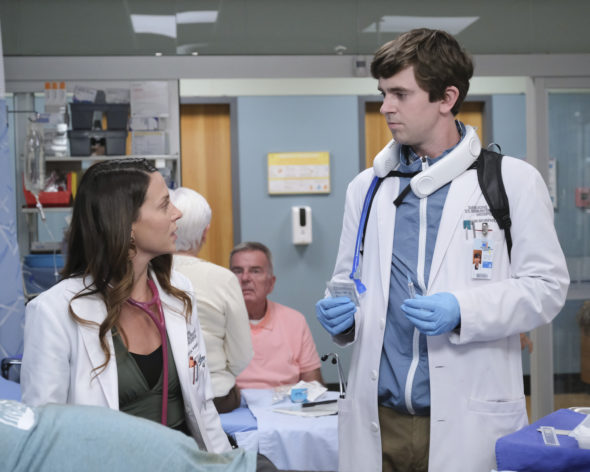 The 100th episode celebration for The Good Doctor has been put on ice. ABC has delayed tonight’s special episode and has replaced the medical drama with an interview special.

Tonight’s episode of The Good Doctor was replaced at the last minute by A Special Edition of 20/20 – Breaking with the President: The Mike Pence Interview. The former vice president will likely be talking about his new book, So Help Me God in his first major televised interview following the insurrection on January 6, 2021.

Here’s what to expect when the 100th episode, titled “Hot and Bothered,” airs next week, on Monday, November 21st:

In the midst of a heatwave, Dr. Shaun Murphy and Dr. Danica Powell are at odds when it comes to their patient’s surgery. Their heated stalemate tests Shaun’s patience and his willingness to compromise. Meanwhile, when the hospital loses power, Lea and Dr. Aaron Glassman are forced to come up with a quick solution or risk a total shutdown that could risk patients’ lives on the 100th episode of the series.

What do you think? Do you enjoy this ABC TV series? Are you disappointed that The Good Doctor was pre-empted?

Good show not many left

Who cares about Mike Pence? He was a terrible VP. I will watch something else

Why would I want to watch a political pony show instead of being entertained by a wonderful show (The Good Doctor)? My evening is for relaxing with a good show NOT FOR POLITICAL NONSENSE. The news at 5:00pm is where the Pence program belongs. Very bad decision on the part of ABC.

You have got to be kidding! To preempt a wonderful show like THE GOOD DOCTOR for a ridiculous clown show!!!!

I’m not happy it was pre-empted. They could have re-aired it in the middle of the night likebthey do when Monday night football is on. Didn’t watch the Mike Pence interview. Wasn’t interested.

Wish they had pre-empted Bachelor rather than a history making episode of a quality show. Do better.

Why did they pick this show to pre-empt? They could have taken one hour from The Bachelor instead! Or put it on after the News and pushed Jimmy Kimmel back an hour!

I am so sorry. I guess I am not aware what spam is. I just was suggesting that you had other options.

look forward to seeing it next week Monday so good enjoy it and love it. Freddie Highmore is the best star in this show. Beautiful cast and crew . Unbelievable congratulations mark 100 episodes. Milestone this series.