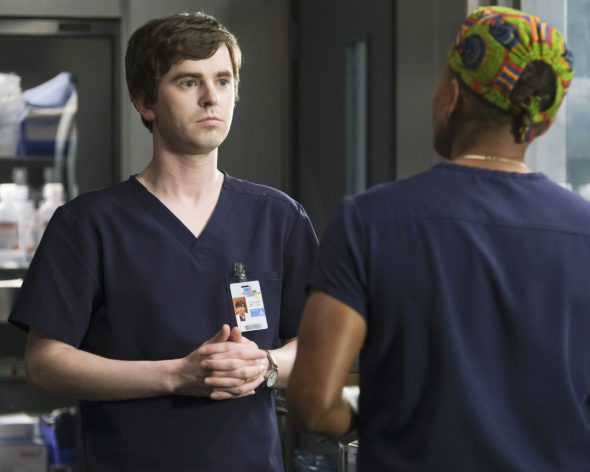 Shaun is back to save the day as best he can. Has The Good Doctor TV show been cancelled or renewed for a seventh season on ABC? The television vulture is watching all the latest cancellation and renewal news, so this page is the place to track the status of The Good Doctor, season seven. Bookmark it, or subscribe for the latest updates. Remember, the television vulture is watching your shows. Are you?

The sixth season of The Good Doctor averages a 0.32 rating in the 18-49 demographic and 3.22 million viewers in the live+same day ratings (includes all DVR playback through 3:00 AM). Compared to season five, that’s down by 20% in the demo and down by 14% in viewership. While these numbers don’t include further delayed or streaming viewing, they are a very good indicator of how a show is performing, especially when compared to others on the same channel. There can be other economic factors involved in a show’s fate, but the higher-rated series are usually renewed and the lower-rated ones are cancelled. Find out how The Good Doctor stacks up against other ABC TV shows.

Will ABC cancel or renew The Good Doctor for season seven? The show is a reliable player in the traditional ratings, and episodes often more than double their viewership once the live+7 day ratings are added in. As long as Highmore wants to continue, I think The Good Doctor will be renewed for a seventh season. I’ll update this page with breaking developments. Subscribe for free alerts on The Good Doctor cancellation or renewal news.

What do you think? Do you hope The Good Doctor TV show will be renewed for a seventh season? How would you feel if ABC cancelled this TV series, instead?

We will stop watching the Good Doctor if they continue to have story lines like last night. Every creature deserves to live! Too much of taking lives of animals to benefit others is so wrong! They have a right to live too!

I agree, and to bring a living animal to a hospital to be killed there?

Please renew this program. It is unique and keeps you interested.

Renew it. I cant get enough of a person with that kind of handicap being a smarter doctor than those who have been at it a lot longer!!!